Today in pretty space pics: a whirling image of the European Southern Observatory’s Very Large Telescope and the stars above... 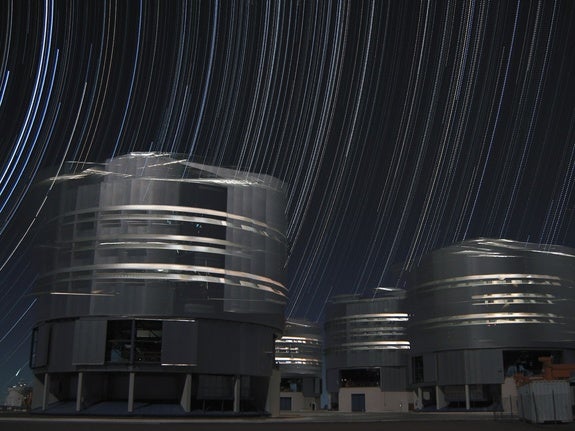 The night sky above the 2600-metre-high Cerro Paranal in the Atacama Desert in Chile is dark and clear. So clear, that very long sequences of photos can easily be taken without a single cloud obscuring the stars as they rotate around the southern celestial pole. The site is home to ESO’s Very Large Telescope (VLT) array. Its four 8.2-metre Unit Telescopes dominate this image made by Farid Char, a student at Chile’s Universidad Católica del Norte. One of the smaller Auxiliary Telescopes is also visible, hiding in the background in the bottom left corner. But the star of the show is the striking starry sky. Made by combining 450 exposures of 20 seconds each, the image captures the apparent stellar movement during two and a half hours. This movement, signalled by dotted trails, is illusory: the Earth, and not the stars, is rotating as time goes by. The sequence has also captured the Unit Telescopes as they observe different objects in the night sky over the hours, transforming their precise motions into a seemingly frenetic blur of activity. What’s more, one of the exposures has even caught a shooting star, seen as a small trail above the Auxiliary Telescope in the bottom left of the image. Links Farid Char’s photos.
SHARE

The VLT sits at Cerro Paranal in Chile’s Atacama Desert, where it is high and dry enough that moisture in the air doesn’t interfere with the incoming light streaming into the telescope from the far reaches of the universe. This image captures the VLT array’s four 27-foot telescopes in a kind of time lapse. It was actually stitched together from 450 invdividual 20-second exposures taken over more than two hours, creating the effect you see here. The telescopes appear to be moving because they are–throughout the night they rotate in place as they target different celestial objects.

The image was created by Farid Char, a student at Chile’s Universidad Católica del Norte. If you care to see the VLT depicted in equally artistic fashion, there’s a beautiful time lapse video of the telescope at work here. After this image, it’s the second-coolest thing you’ll see today.