Soft robots would be useful for a variety of things — they could grip objects with precision and sensitivity, and... 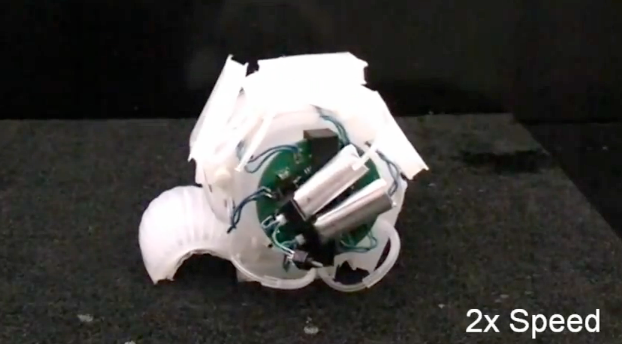 Soft robots would be useful for a variety of things — they could grip objects with precision and sensitivity, and they could roll along more quietly than their counterparts with metal exoskeletons. Here is a new one that could do such tasks purely on its own, without any external power source or command center.

This soft robot, developed at MIT’s Distributed Robotics Lab, uses inflatable silicone actuators to push itself along. The actuators work somewhat like a flipper, pushing the robot into a forward roll. They deflate once the robot has rolled over, and the next one inflates to continue the forward motion, like inflatable cogs in a set of gears. It employs a pneumatic battery and electropermanent magnets, which only require a power input to change their states — they don’t use up any power once they are in the desired state.

The pneumatic battery uses hydrogen peroxide and a catalyst to generate gas, which inflates the silicone flaps, as explained by roboticist and blogger Travis Deyle. The benefit here is that the entire system is self-regulated, so the battery uses the minimal amount of hydrogen peroxide required, which is both efficient and safe, because there would be no excess pressure buildup. The whole system requires no external cables or tethers that could get in the way of a smooth robotic roll. Watch it move in the video below.