The tedious, carpal-tunnel-inducing pipette work of cell biologists may soon be relegated to robots, thanks to a new cell factory... 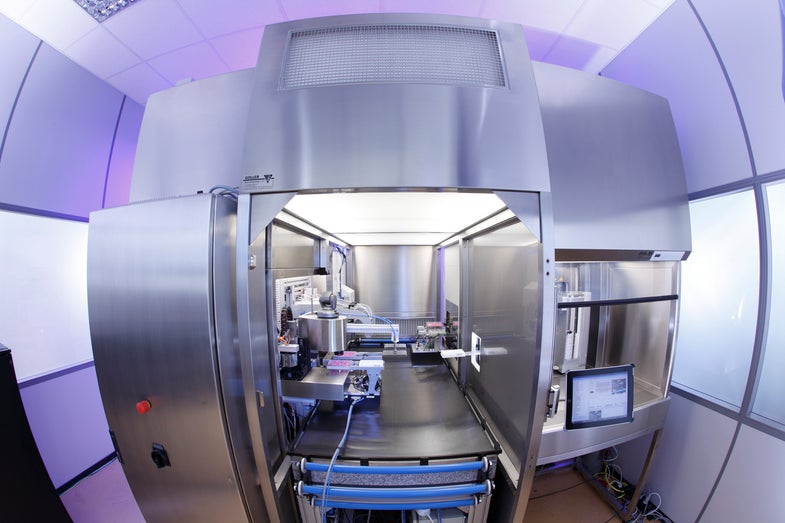 The tedious, carpal-tunnel-inducing pipette work of cell biologists may soon be relegated to robots, thanks to a new cell factory developed in Germany. This could free humans to perform new studies and ask new questions, as automated equipment takes over the time-consuming task of growing, feeding and observing cells in the lab.

Cell cultures are one of the most important tools in biology, used to study a huge host of diseases and cellular functions. But cells are delicate, and for now they must be cultivated by hand, grown in petri dishes and nurtured with a special broth until there are enough cells to transfer to even more petri dishes. The transfer is done via pipette so the cells aren’t harmed.

Many robots aren’t equipped with a gentle enough touch to pull this off, and the humid, warm conditions cells need to grow are not very friendly to electronics. But now, researchers at three different Fraunhofer Institutes have developed a system that can automate this entire process, using several different robots and machines.

One robot is designed to move around the first-generation cell cultures, called multititer plates, among various spots. Then an automated microscope checks the cells to assess their growth, adjusting the light and focus as needed, and the images are fed into a computer system. Special software determines how many cell colonies are present on the plates, and if there are enough, another robot is tasked with picking them up. Using a hollow needle, it chooses cells measuring between 100 and 200 micrometers and transfers them to a new container for continued growth.

The system can produce about 500 cell cultures a month, according to a news release from Fraunhofer. Biologists can even train the system to recognize certain cell types, based on their physical characteristics. The whole thing is big enough to fill a small lab.

Fraunhofer already has a cell factory of a different sort, producing sheets of human skin. That process is also controlled by robots and computers that monitor the cells’ health and growth. But this new one is based on a modular design, so it can be adapted for various uses — for instance, if a lab only wants to automate one part of the cell culture process.

Researchers set up a prototype at the Max Planck Institute, where biologists will use it to determine protein functions, according to Fraunhofer Research News. Let’s hope nothing goes wrong and the robots do not use their new skills to create a new legion of multicellular servants.