Behold, your galactic center. This Hubble image, captured with the space telescope’s Near Infrared Camera and Multi-Object Spectrometer (NICMOS), is... 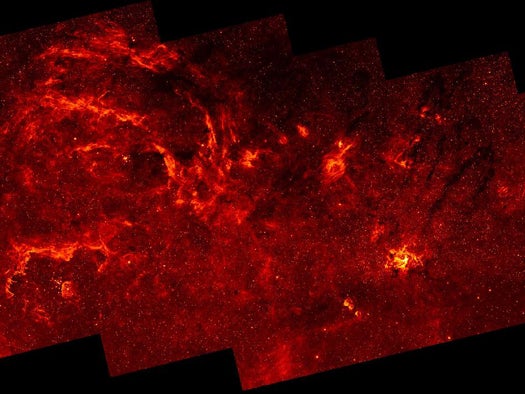 Behold, your galactic center. This Hubble image, captured with the space telescope’s Near Infrared Camera and Multi-Object Spectrometer (NICMOS), is the highest-resolution pic of the Milky Way’s galactic center taken to date, taking in a newly discovered group of massive stars, lots of super-hot gas, and roughly 35,000 square light years of space in one sweeping mosaic.

But naturally this image goes far beyond simply being aesthetically pleasing. The galactic center is obscured from our view by gas and dust, but Hubble’s infrared camera can peer through that dense, swirling detritus and focus in on the various structures and processes taking place at our galaxy’s core. That in turn makes it a kind of laboratory in which astronomers can observe and draw conclusions about what’s happening not just in the Milky Way but in other galactic hubs around the universe.

The ambient red glow is produced by ionized hydrogen gas, but amidst that you can clearly see plenty of massive stars distributed across the panorama–a finding that is relatively new for astronomers who thought most of the massive stars at the galaxy’s center were confined into three general clusters. And if you look really hard, you can see the supermassive black hole that sits at the very center of our galaxy, surrounded by a spiral of swirling gas.

See it? Maybe you need the super-enlarged wallpaper quality version.