Communication Between People and Objects: A Symposium

The Museum of Modern Art’s exhibition “Talk To Me” explores the complicated interactions between machines and their humans in a... 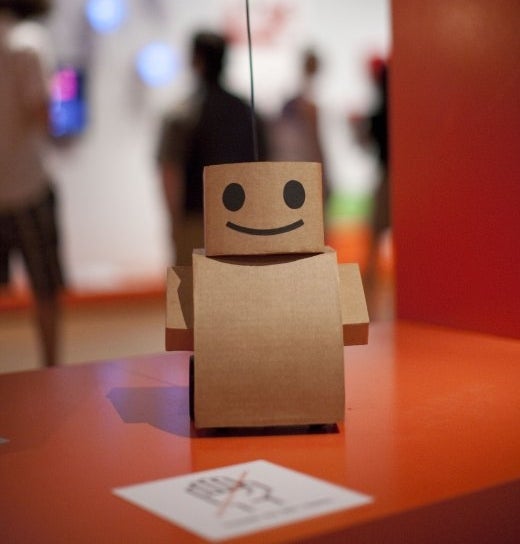 Meet Sam, a Tweenbot in NYC's Washington Square Park. Armed with nothing more than a flag that asked passersby to point him toward a particular destination, artist Kacie Kinzer fully expected her creation—made of a battery-operated motor and cardboard—would be crushed, lost, or thrown away. "Every time the robot got caught under a park bench, ground futilely against a curb, or became trapped in a pothole," Kinzer says, "some passerby would always rescue it and send it toward its goal." If Sam's destination seemed too dangerous, people sometimes ignored the instructions on the flag: "One man turned the robot back in the direction from which it had just come, saying out loud to the Tweenbot, 'You can't go that way, it's toward the road.'". Scott Rudd
SHARE

The Museum of Modern Art’s exhibition “Talk To Me” explores the complicated interactions between machines and their humans in a fun and fascinating way. Next week, the museum’s holding an all-day symposium, open to the public.

It will feature discussions and presentations by curator Paola Antonelli and some 20 other luminaries, including chef Marcus Samuelsson, artist Natalie Jeremijenko, and performer Sputniko.

Subjects covered will include “design and script writing, cognitive science, gaming, augmented reality, and communication.” The keynote address will be delivered by Radiolab host Jad Abumrad, who just received a MacArthur grant.

Hopefully the adorable Tweenbot (seen below) will put in an appearance as well.