More than a hundred terabytes dedicated to maps of the universe 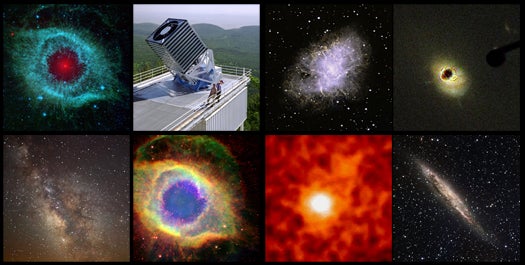 In 1998, astronomers using the 2.5-meter Sloan telescope at New Mexico’s Apache Point Observatory began scanning the sky and loading the images they captured into the freely available Sloan Digital Sky Survey database. Since then, astronomers have used that 100-terabyte-plus cache to map half a billion stars, galaxies, asteroids and quasars; create 3-D maps of our outer galaxy; and study the structure of the universe.

Last year, scientists used the SDSS’s enormous sample of stars to determine why some white dwarfs have unexpected traces of metal in their atmospheres. By comparing SDSS measurements of thousands of newly identified white dwarfs with those of other stars, they determined that the “pollution” is most likely planetary debris, including material that once contained water. Because the Milky Way contains so many polluted white dwarfs, scientists reasoned that rocky and watery planets may be more common than previously thought—thus, extraterrestrial life may be more likely to exist in our galaxy than scientists had previously guessed.