A couple years ago we saw wireless technology that would allow us to see through walls. Now, the same team... 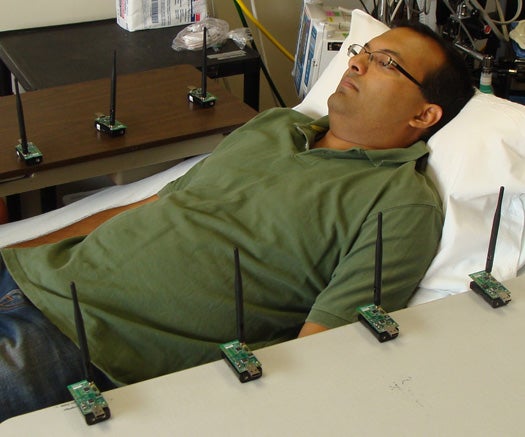 A couple years ago we saw wireless technology that would allow us to see through walls. Now, the same team of researchers, from the University of Utah, is putting that motion detection technology to work monitoring breathing patterns. So not only can the network see through your bedroom wall, it can hear you breathing.

Team leader Neal Patwari demonstrated the system by lying in a hospital bed surrounded by 20 wireless transceivers operating at a frequency of 2.4 gigahertz. He timed his breathing to be about 15 breaths per minute, confirming this measurement with a carbon dioxide detector. The algorithm accurately measures respiration within 0.4 to 0.2 breaths per minute based on only 30 seconds of data, much better than most monitors, which round off to the nearest full breath.

The system will also be cheaper than existing breath monitors, as it uses off-the-shelf wireless transceivers similar to the ones used for home computer networks. The next step for its development is for the team to determine if a different radio frequency could detect breathing better than 2.4 gigahertz and if the system could detect two people breathing at the same time, but not in unison. In addition to providing technology for use in hospitals, Patwari hopes to integrate the system into at-home baby monitors in five years or so.

[University of Utah via Engadget]