Video: The Dead Sea Scrolls are Now Available for Your Online Perusal, Courtesy of Google

Just as they promised almost a year ago, Google, in partnership with the Israel Museum in Jerusalem, has photographed the... 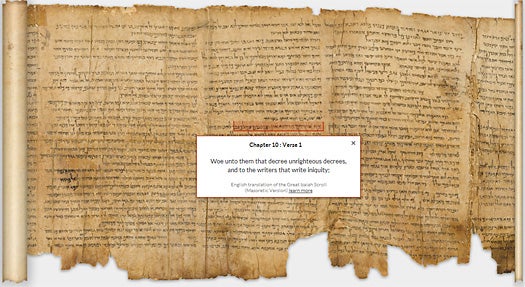 Just as they promised almost a year ago, Google, in partnership with the Israel Museum in Jerusalem, has photographed the Dead Sea Scrolls for the first time since the 1950s, and made them available online for those who can’t make the trek to see them in person.

The Dead Sea Scrolls, discovered in 1947, are the oldest known biblical manuscripts. Five scrolls are currently available on the Israel Museum’s website: The Great Isaiah Scroll, The Temple Scroll, The War Scroll, The Community Rule Scroll and The Commentary on the Habakkuk Scroll. They were photographed in up to 1,200 megapixel high resolution, high enough that you can zoom in and see cracks and discolorations in the animal skin the verses are written on.

The Great Isaiah Scroll is divided into chapters and verses, shown on mouse-over, and gives you an English translation of the verse when you click on it. The website also allows you to leave comments, a sort of marginalia for the modern age. Learn more about the scrolls and their digitization in the video below.