The New York Times took a look at start-up Narrative Science today, a company that has developed what is a... 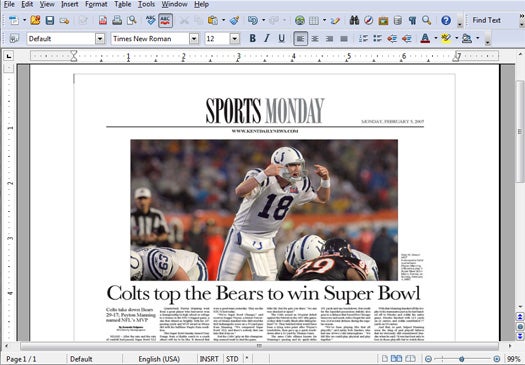 The New York Times took a look at start-up Narrative Science today, a company that has developed what is a pretty cool step forward for artificial intelligence, and a pretty frightening step towards human labor’s eventual replacement by machines, a piece of software that takes data (sports statistics, financial reports, etc.) and turns it into news articles. They’re pretty confident about their product too, with one of the founders predicting that a computer program will win a Pulitzer within five years (and that it may well be their technology).

What makes Narrative Science different than previous attempts at computer-generated news briefs is that this software has the ability to make inferences and actually provide an angle for a story, the New York Times reports. In the realm of sports, it learns the meaning of terms like “come from behind” and “team effort” and leads the article with the aspect of the game it deems most important. This keeps it from being a plug-and-chug fact regurgitator and actually adds some variety to the articles it’s writing. The example article posted in the Times led with the sentence “Wisconsin jumped out to an early lead and never looked back in a 51-17 win over UNLV on Thursday at Camp Randall Stadium.” Not bad, for a computer.

Most of Narrative Science’s 20 customers aren’t talking, but the Times was able to confirm that the Big Ten Network has been using the software since the spring of 2010 to generate recaps of sports games. Use of the software helped grow their web traffic for football games by 40 percent between the 2009 and 2010 seasons. And it’s cheap – each 500 word article currently only costs $10. If Narrative Science keeps improving their software, lowly human writers may have some competition.