Single-Molecule Motor Runs on Electricity, Could Be Used for Single-Cell Surgery

We’ve seen single-molecule “motors” before, but they’re pretty primitive, motors only in the most basic sense of the word. But... 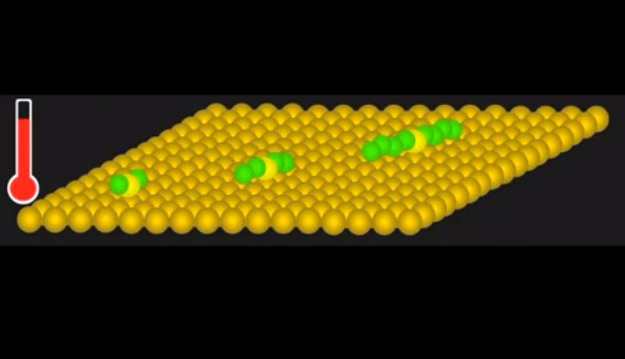 We’ve seen single-molecule “motors” before, but they’re pretty primitive, motors only in the most basic sense of the word. But this new one, made of a single butyl methyl sulfide molecule, is much closer to what images the word “motor” might conjure: when electricity is applied, the molecule is triggered to spin, without affecting any other molecules around it.

Past single-molecule motors tended to be triggered with light, like this pump-like molecule. But light tends to also affect lots of other molecules nearby, and sometimes has an unpredictable effect. This new one (the molecule in question is an 18-atom molecule which, according to MSNBC, “gives brandy its distinctive smell.” More importantly, it can be controlled by a stream of electrons shot from a Scanning Tunneling Microscope, which not only triggers the molecule to start spinning, it also enables viewing of the event.

That microscope is so precise that it can direct a beam of electrons at individual butyl methyl sulfide molecules (which are about one nanometer in size–for comparison, a human hair is 60,000 nanometers thick), causing one to turn without affecting any others.

There are caveats, of course; the experiments are being performed at excessively cold temperatures, about 5 degrees Kelvin, to try to slow down the movement. At that temperature, the molecule spins about 120 times per second. At 100 degrees Kelvin–about -279 degrees Fahrenheit–that jumps to over a million, which is as you can imagine pretty difficult to monitor.

Still, there are lots of possible uses for such a tiny motor, from nanorobots that can perform surgery on a single cell to providing power for tiny nanoscale sensors. Those might be “several decades away,” but at least the Guinness Book is convinced that this is the world’s smallest motor. (Not that we completely trust everything Guinness says.)