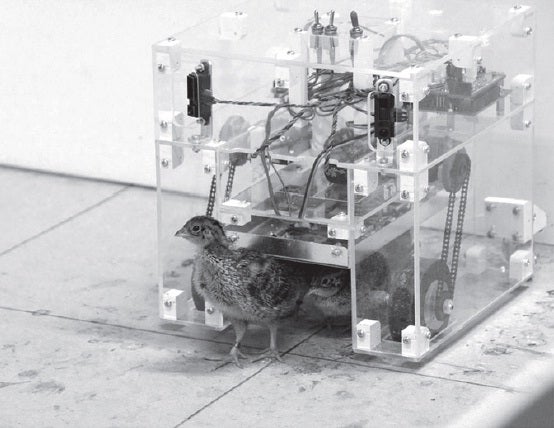 We love when live animals follow a robot’s lead, from Robofish leading schools of real fish away from harm, to babies fooled into thinking a friendly robot is human. But studies have not yet shown how these robotic surrogates can affect animal development. Now a new study suggests they can have a positive effect — at least for a while.

Researchers at the University of Rennes in France built two comfy cube-shaped robotic mother hens, and introduced them to 36-hour-old Japanese quail chicks. The team took 24 chicks and divided them into groups of four. All six groups hung out with the robot for an hour a day for 10 days in a row, according to an account at PhysOrg. Three groups spent time with a mobilized version of the robot, and three groups got a stationary one. The chicks stopped interacting with the robot after the 10th day.

But here’s the rub: This evaporated after a few days. On the 20th day, the team repeated the grid experiment, and found the chicks with the stationary robot had improved so much, there was no longer a significant difference in their behavior.

Still, it’s an interesting example of how robotic technology can impact animal development. Imagine a zoo or a rehabilitation center with some orphaned animals; if they have a movable object the birds can bond with, the birds might do a little better, this study suggests.

The other QuailBot we’ve seen was developed to monitor sage grouse mating behavior. It’s nice to know this new QuailBot could conceivably help their offspring.

The study was published in the journal Bioinspiration and Biomimetics.