Congress Preserves James Webb Telescope For Now, But At What Cost?

Some good news: The James Webb Space Telescope appears to be safe, at least for now. Congress (or at least... 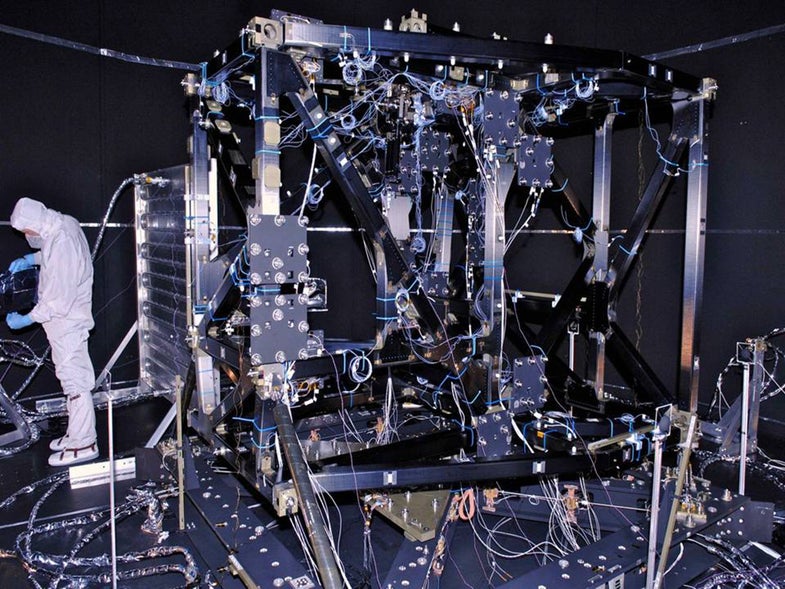 Some good news: The James Webb Space Telescope appears to be safe, at least for now. Congress (or at least the Senate) is planning to give NASA more money than it requested to finish the huge infrared telescope, the successor to Hubble and NASA’s biggest post-shuttle project. But there’s also some bad news: Other science missions may pay the price.

Budget writers in the Senate said last week the telescope will continue being built, which is much better than the news we heard in July, when a House Appropriations subcommittee killed it. Budget debates (and astronomers’ outrage) ensued, and in this latest version, NASA gets $1 billion more and the telescope is preserved.

Initial reports last week indicated the telescope would be funded, but it wasn’t clear where the money originated; now it’s clear it comes out of NASA’s science budget. The Senate Approps’ Subcommittee on Commerce, Justice, Science and Related Agencies explains it thusly:

“NASA has never requested adequate resources to fund [JWST’s] development. As with many other projects, budget optimism led to massive ongoing cost overruns because the project did not have adequate reserves or contingency to address the kinds of technical problems that are expected to arise in a complex, cutting edge project.”

The report, issued Friday, is online here. So now NASA will get $529.6 million for JWST, up from the initial $354.6 million the space agency requested. This is a direct response to a congressional report we told you about last fall, in which auditors from NASA and independent groups decried the mission’s mushrooming price tag.

All this will likely mean negative consequences for other missions, however. NASA’s heliophysics, planetary science and Earth science divisions will all have to bear some of the JWST cost burden, thereby pitting scientists against scientists. Is infrared astronomy worth the astronomical price tag? It will be interesting to see how this plays out as Congress finishes the budget this fall. (It’s supposed to be completed by Sept. 30, but there’s no chance of that — the House has already introduced a continuing resolution, which funds everything at 2011 levels through Nov. 18).

Also, bear in mind that this is by no means over. Both chambers must agree on funding levels, and with a $1 billion gap between the House and Senate, it’s a fair bet that the JWST debate isn’t done yet.

Meanwhile, the telescope’s mirrors are done, and engineers at Northrop Grumman have started testing the Mylar coating that will shield the infrared telescope from the sun’s warmth. Read more of PopSci’s JWST coverage here.