Ocean research, navigation, seafloor mapping, object-tracking (sonar, for example)—they all rely on sound, which is still the best way to... 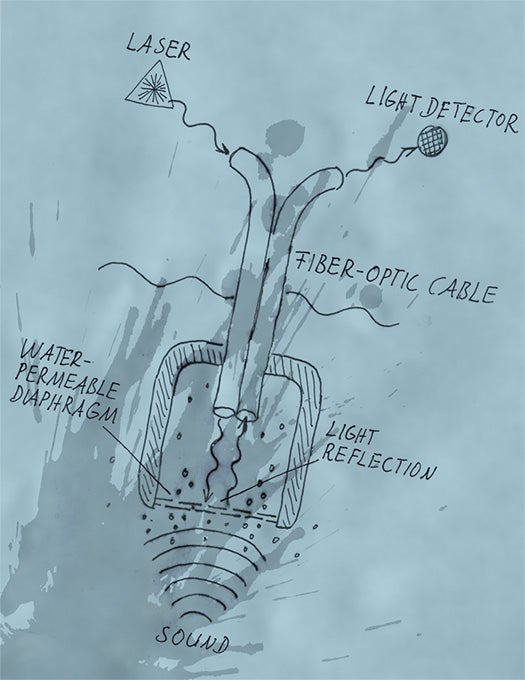 Ocean research, navigation, seafloor mapping, object-tracking (sonar, for example)—they all rely on sound, which is still the best way to transmit information through water. So we wanted to build the ultimate hydrophone, one that could listen to the quietest sounds and the loudest sounds and could work anywhere, even six miles underwater, where the atmospheric pressure is 1,000 times as much as it is up top. Whale ears were our inspiration.

Some deep-diving whales, like orcas, can change their internal ear pressure to match the pressure around them, which helps them hear much better. We made a hydrophone that could do the same thing. Its sensor has three silicon diaphragms. Each is one hundredth the width of a human hair and is covered with thousands of tiny holes that let water pass through. The deeper the sensor goes, the more water flows in, equalizing the pressure and making the sensor much more sensitive to sound. That solved one problem, but it also created a new one. The diaphragms move very little when sound hits them, especially when it’s deep, because water is not very compressible. The quietest sounds in the ocean will move a diaphragm just 0.00001 nanometers; that’s almost one 10,000th of an atom’s diameter. The motion is so subtle, the approach seemed like a dead end. But it turns out it’s possible to detect that movement with lasers.

In our hydrophone, a branched fiber-optic cable runs into the sensor; one branch has a laser and the other an optical detector. The laser shines light on the diaphragms. The diaphragms bounce light back to the optical detector, which translates the reflections into a measure of sound. The hydrophone can hear a range of 160 decibels—that’s like being able to detect whispering in a library and a ton of TNT exploding 60 feet away without distortion. At the low-frequency end, it mostly hears the seismic rumblings of the planet. At the high end, it detects the sound of water molecules bouncing off the sensor.

_ Kilic is an applied physicist at Stanford University._