Uncle Sam Wants You To Store Our Nation’s Radioactive Waste

Which town will be the first to say YIMBY? 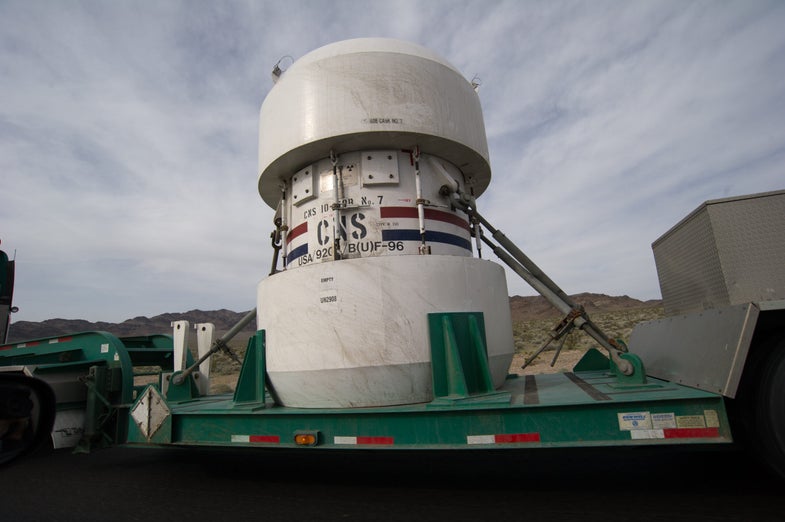 A city or town volunteering to serve as the nation’s nuke dump is a better alternative than having the government pick a place, according to a federal commission. A “consent-based” approach would reduce costs and inevitable delays stemming from a not-in-my-backyard fight, Bloomberg reports.

Nuclear power plants generate several types of radioactive waste, which all has to go somewhere. In some cases, spent fuel rods and waste byproducts are stored at nuclear power plants; in other cases, they’re sent elsewhere for safe storage. Lawmakers have been wrangling over the location of a nuclear waste site for years, with the main proposed site located at Yucca Mountain, Nev., about 100 miles north of Las Vegas. Nevada lawmakers — notably Sen. Harry Reid, the Senate majority leader — have vehemently opposed the plan.

In 2010, President Obama cancelled plans to build a waste storage site at Yucca Mountain. South Carolina, the S.C. county Aiken County, and Washington state are among those storing nuclear waste on an interim basis, and those governments sued the Nuclear Regulatory Commission to force a decision on Yucca Mountain.

All of this is to say the fight is far from over, which is a problem if the U.S. does intend to reinvigorate the nuclear industry. The disaster at Japan’s Fukushima Daiichi nuclear facility is only further evidence that planning is a necessity.

With the right incentives, some community in the continental U.S. might be willing to step up, however. Apparently a facility in Carlsbad, N.M., has accepted and disposed of defense-related nuclear waste for 10 years, and the community could perhaps be persuaded to support an energy-related disposal site, too, according to Sen. Pete Domenici, R-N.M.

It would probably be easier for everyone if such a community just volunteered to store the waste, according to the Blue Ribbon Commission on America’s Nuclear Future. Any takers?