PAMELA Spacecraft Finds a Belt of Antimatter Around the Earth

You probably didn’t wake up this morning wondering what happens to the antiprotons that must be created by the collision... 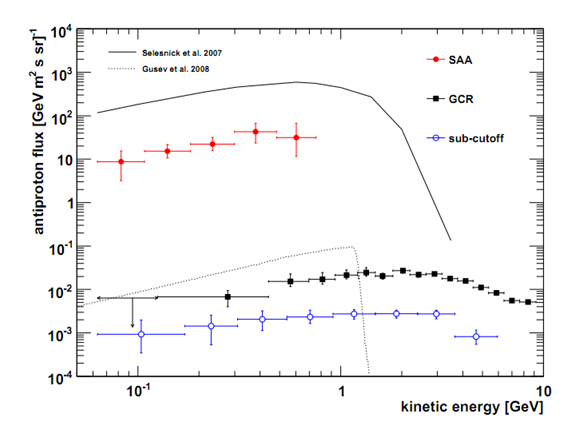 You probably didn’t wake up this morning wondering what happens to the antiprotons that must be created by the collision of cosmic rays with the upper atmosphere. But if you are one of the few who loses sleep over the fact that these antiprotons should be somewhere out there but have yet to be directly detected, we are happy to report that you can rest easy: Astrophysicists have finally found them trapped in an antiproton belt around the Earth.

For those of you who couldn’t care less about antiprotons or what an antiproton is, this is less a story about antiprotons or earth-shattering discovery and more a story about good science bearing fruit. See, when cosmic rays from the sun and elsewhere in the cosmos bombard nuclei in the upper atmosphere, the resulting particle collisions are akin to those that occur in particle accelerators here on the ground. And like those laboratory collisions, these smash-ups birth daughter particles.

Astronomers have long thought these collisions must produce antiprotons just as they do in the lab, but thus far no one has been able to prove definitively what happens to these antiprotons as they’re difficult to seek out and measure, especially from the ground. Theoretically it made sense that they should be trapped by the Earth’s magnetic field, yet no antiproton cloud was empirically evident.

Enter PAMELA, a low Earth orbiting spacecraft launched in 2006 to seek out antiprotons in cosmic rays. Each day PAMELA makes a pass through the South Atlantic Anomaly, the part of the Van Allen Belts that come closest to the Earth and a sort of tide pool for energetic particles. If the antiprotons are collecting anywhere, they ought to be here.

And now, after analyzing 850 days of data, it turns out they are. PAMELA tracked down exactly 28 of them, which is actually way more than one might expect to find blowing in the solar wind. In other words, antiprotons are being captured and stored there. Solid scientific theory (and high-tech orbiting hardware) wins again.