Maybe it's not so dry over there after all 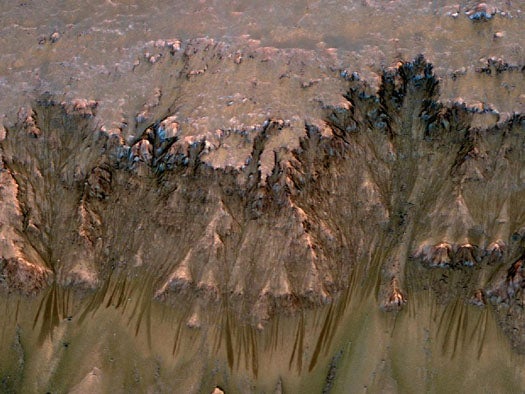 All week we’ve heard rumblings from NASA that big Mars science news would drop today, and sure enough that news is big: NASA’s Mars Reconnaissance Orbiter has quite possibly found liquid water flowing on the surface of Mars. Not water that flowed millennia ago, or water that once flowed but is now permanently ice. This water appears to be liquid to this day, at least part of the time. That is, during the warmest months on Mars this salty brine thaws and flows like liquid across the surface of the planet.

There are huge implications in that of course, provided the hypothesis turns out to be true. It underscores the idea that Mars could indeed be capable of harboring some kind of life. And it whets (wets?) the appetite for future Mars exploration, both robotic and–eventually–manned.

The evidence comes to us in the form of the finger-like features you see running down the slope of the crater in the pic above (and in the animation below). Regular observation shows that they appear during the warm months, extend themselves down sloping terrain, then fade away when temperatures drop in the fall. During the next Martian spring they return again. And while there are a few hypotheses floating around out there as to what might cause these features to appear, retreat, and appear again as the seasons change, the general consensus seems to be that briny water is the culprit.

Don’t get the wrong idea–these features are far from being fully explained. But a briny water would fit the aforementioned characteristics nicely. The saltiness would lower the water’s freezing point such that it could flow even during the cold (relative to Earth) Martian spring and summer. And we already know that brines were abundant in Mars’ past, making them a much more likely candidate to make these dark features rather than something wholly new.

But mysteries still abound. For one, the markings aren’t dark because they are wet, but because of something else at play here that is currently unexplained. Equally inexplicable: why the features brighten again when the temperatures decline in fall and winter.

But the finding is no less significant for the questions it raises. Liquid water on mars, salty though it may be, is a huge finding for those holding out hope that Mars might yet yield some kind of evidence of life. And even if it doesn’t, perhaps it could help sustain life–perhaps life forms visiting from another nearby planet–at some point in the future.