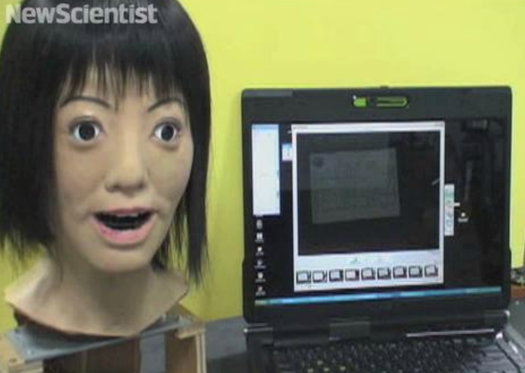 Singing robots are nothing new, but this one from the National Taiwan University of Science and Technology in Taipei is the first one that we know of that actually reads a musical score before performing it. Nevermind the fact that watching it do so is undeniably uncomfortable–the researchers behind this humanoid head say that someday a collection of them could form a theatrical robotic musical troupe.

Prior to performing, the robot reads the musical score in front of her using cameras mounted in her eyes. An algorithm extracts rhythm, pitch, lyrics, and other musical characteristics from the sheet music and beams that info to a voice synthesizer. The head then comes to life, opening and closing its mouth as the synth belts out the lyrics.

Creepy, sure, but reading music is another example of a task that robots can do better than humans, the researchers say. It takes their bot just 40 seconds to read and memorize an entire score (in any language), and it can begin performing a newly acquired piece of music immediately. Even the best human prodigies can’t touch that kind of turnaround.