[Updated 2:25 p.m.] Honda sent us an e-mail saying the Asahi Shimbun report is “speculative.” “Although Honda hopes that ASIMO... 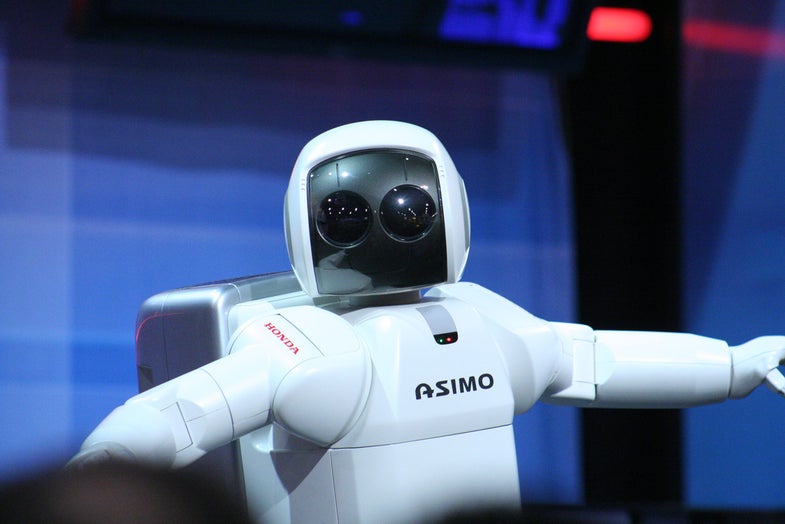 [Updated 2:25 p.m.] Honda sent us an e-mail saying the Asahi Shimbun report is “speculative.” “Although Honda hopes that ASIMO will someday be a helper to people, at this point the robot is solely a research and design project,” a Honda spokeswoman said.

A couple camera-toting robots have been tooling around the crippled Fukushima Daiichi nuclear plant, where radiation levels are still making it unsafe for human workers. Now Japanese media are reporting the crews are getting their first humanoid counterpart.

Honda is aiming to redesign Asimo, its 4-foot-tall humanoid robot, so it can join workers at Fukushima Daiichi, according to Japanese media. Asimo would need tires or caterpillar tracks instead of its delicate legs, and the robot would also need updates to its arms so they can move as smoothly as a human’s, according to the newspaper Asahi Shimbun (reported by AFP).

Since it was introduced a little more than 10 years ago, Asimo has been a robot ambassador of sorts, used mostly to spur robotics research and development. The robot greets children at science museums and has even met heads of state. But it has not been tapped for such difficult labor before.

Asimo can easily shake hands, carry a tray and push small objects, but it would need motorized shoulders, elbows and wrists to get more human-like moves, the paper says. It’s not clear what Asimo would be doing inside the Fukushima plant, but it would likely go into radiation hotspots where it remains dangerous for humans to enter.

Fukushima Daiichi’s reactors have been leaking radiation since the March 11 earthquake and tsunami knocked out its cooling systems. Workers are being exposed to high levels of radiation while trying to make repairs. Japanese elderly have even offered to do the job, to spare the younger workers from harmful radiation. But a human-like robot would clearly be a better alternative.