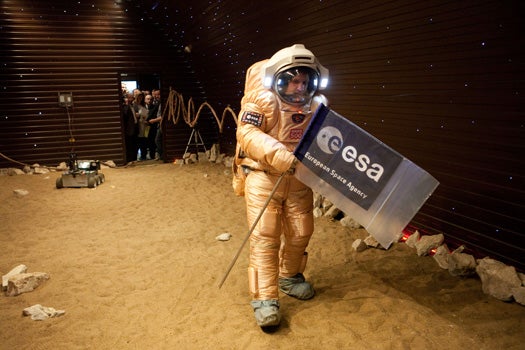 Careful--they have clipboards and could be hostile. ESA / IPMB
SHARE

If it’s a space race the Russians want, a space race they shall have. But et tu, Europe? Russian news outlet Ria Novosti is reporting that the European Space Agency (ESA), long the ally of Cold War champion NASA, is teaming with Russia on a joint manned mission to Mars, and that their crew will be the first to set foot on the Red Planet.

At a press briefing at an air show in Russia this week, ESA chief Jean-Jacques Dordain said the ESA and Roskosmos will “carry out the first flight to Mars together.” Apparently a major catalyst in this decision is the ongoing success of the Mars500 project, in which a six-member simulated crew is undergoing a 520-day isolation experiment simulating the long trip to and from Mars. Russia’s Institute of Biomedical Problems is heading Mars500–which “returns to Earth” in November–but the ESA is closely participating.

Dordain stopped short of declaring a timetable for such a mission, or on whose spacecraft the joint mission will ride. But he did set the stage for another epic, decades-long scientific struggle between two great world powers. So who will set foot on Mars first, the U.S. or Russia and its European partners?

Somewhere, a group of Chinese scientists is laughing.