The ongoing drought in Texas has turned up new debris from the 2003 Columbia shuttle disaster that killed seven NASA... 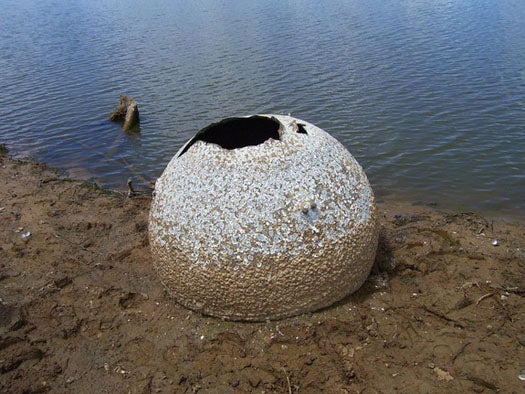 The ongoing drought in Texas has turned up new debris from the 2003 Columbia shuttle disaster that killed seven NASA astronauts when the shuttle disintegrated upon re-entry over Texas and Louisiana. The spherical tank was found in an exposed part of Lake Nacogdoches about 160 miles northeast of Houston where it came to rest after the disaster eight years ago.

The debris was discovered last week but was only confirmed as NASA hardware yesterday after Nacogdoches police sent pictures of the tank to NASA officials. An engineer on the shuttle program was able to confirm that the 40-inch tank was one of 18 that flew on Columbia to store liquid hydrogen and liquid oxygen. It will be shipped back to Kennedy Space Center where all the debris that has been collected from the Columbia incident is kept in a climate controlled hangar.

This tank is apparently not alone, though it is one of the more significant pieces of the Columbia aftermath to emerge recently. Pieces of debris from the disaster are still trickling in to NASA, usually discovered by people in Texas and Louisiana who then contact the agency. Only about 40 percent of the spacecraft has been recovered thus far, NASA estimates.

The rest either burned up during the re-entry disaster or is still scattered across East Texas and Louisiana. Columbia disintegrated as it was headed back to KSC after a 16-day mission. The structural failure was attributed to a piece of insulating foam that separated from the main fuel tank during launch, damaging the heat shield on the shuttle itself and causing a critical failure.