Engineers at MIT are tinkering with all sorts of advanced solar power technology, like self-assembling solar cells, virus-structured cells and... 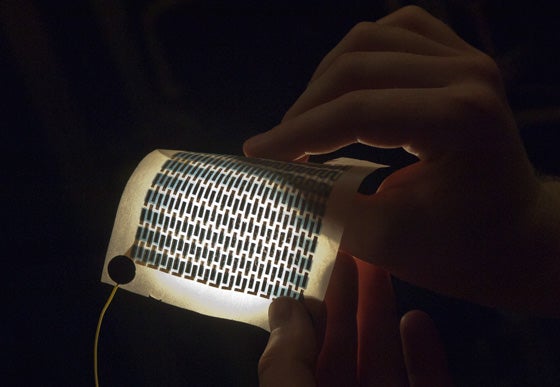 Engineers at MIT are tinkering with all sorts of advanced solar power technology, like self-assembling solar cells, virus-structured cells and an artificial leaf system that mimics photosynthesis. Their latest project is somewhat more simple: It can be printed on a regular sheet of paper.

The cell is tough enough to work even after being folded into a paper airplane — unlike many “flexible” cells, it’s not merely bendable, but foldable as well. It’s made using a relatively simple vapor deposition process, rather than the typical high-temperature etching process used to make solar cells.

Like the silver ballpoint pen we saw earlier this month, the system uses a 3-D printing technique to deposit materials onto a surface. The process is a little more complex than using a printer, however, because it requires five layers of material and a stencil to form the patterns of the cells. It also has to be done in a vacuum chamber, so it’s probably not doable for the average DIY-er.

But as MIT News points out, the vapor deposition process is widely used throughout various industries — it’s similar to the process used to make the silver lining in bags of potato chips — so it can be done on a large scale at low cost.

To test their technology, engineers led by chemical engineering professor Karen Gleason folded a paper photovoltaic cell into a paper airplane, and the cell still collected energy from sunlight. They also printed one on a piece of plastic, like the kind used to make soda bottles, and folded that one 1,000 times. It still worked, while a traditionally-produced cell on the same plastic failed after just one fold.

The team even printed a cell on a piece of paper, and then put that paper in a regular laser printer to see what would happen. It still worked, even after a laser-heated layer of toner ink was printed on top of it. In tests, the folded cells were still able to gather ambient sunlight to power a clock and other devices.

They are not that efficient — a paltry 1 percent — but the researchers think that will improve as they fine-tune the “ink” and the deposition process. But even now, “it’s good enough to power a small electric gizmo,” said engineering professor Vladimir Bulović. Watch a demonstration below.

Foldability is important for portable, cheap circuits — a circuit or PV cell that can withstand being crumpled in a pocket would be a major advancement for portable devices. But the lightweight nature of this cell may be its biggest breakthrough. Functional photovoltaic cells printed on paper or thin plastic could have a host of uses, from lightweight battery technology to portable power for developing countries.

The research is reported in this week’s issue of the journal Advanced Materials.