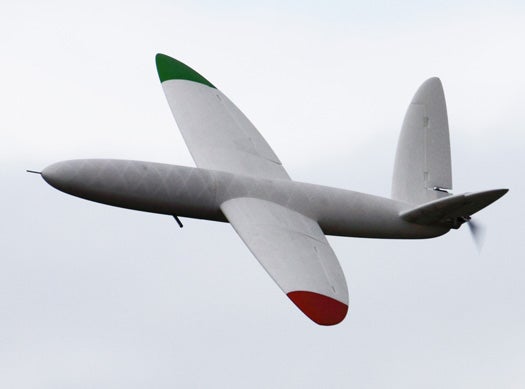 Engineers at the University of Southampton in the UK have designed, printed, and sent skyward the world’s first aircraft manufactured almost entirely via 3-D printing technology. The UAV–dubbed SULSA (Southampton University Laser Sintered Aircraft)–is powered by an electric motor that is pretty much the only part of the aircraft not created via additive manufacturing methods.

It’s no slouch of a UAV either. SULSA boasts a 6.5-foot wingspan, a top speed of about 100 miles per hour, and is nearly silent while cruising. Created on an EOS EOSINT P730 nylon laser sintering machine, its wings, hatches, control surfaces–basically everything that makes up its structure and aerodynamic controls–was custom printed to snap together. It requires no fasteners and no tools to assemble.

This, of course, is the dream of aircraft makers big and small. Building something as large as a Boeing 787 for instance requires a lot of machining, a lot of custom tooling, and above all a lot of waste. Additive manufacturing (that’s a fancy way of saying 3-D printing) builds components layer by layer, allowing designers to create parts with virtually no waste. It also lets them tweak designs on the fly and go from CAD drawing to prototype extremely quickly (which is why it’s also referred to as “rapid prototyping”).

Moreover, it allows aircraft engineers tap design tricks that are known to be more efficient and effective but are also expensive and wasteful to create in practice–like the elliptical wings on SULSA. So perhaps it’s no surprise that elsewhere in the UK a team of Airbus engineers is working on printing an entire aircraft wing–that is, a real jetliner aircraft wing, the kind that would carry people–with the ultimate goal of printing out most of the important components of an entire passenger aircraft.