We’ve written about tentacle-like robotic arms here before, but never one quite like this: a robotic tentacle that is soft... 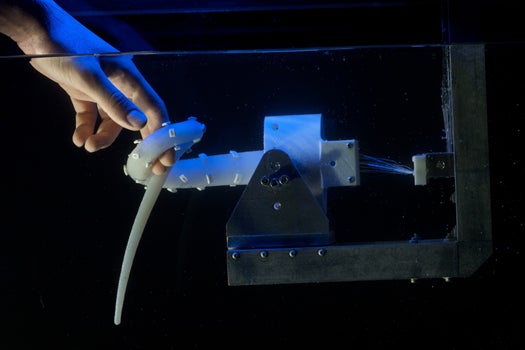 We’ve written about tentacle-like robotic arms here before, but never one quite like this: a robotic tentacle that is soft and pliant enough to wrap around object but that can also stiffen to put a tight grip on things. But there’s another key difference between previous robotic tentacles and this one. Others are designed as manipulators for bomb disposal robots or as simple prosthetic grippers. This one is designed to be part of an actual robotic octopus.

The European Commission-funded group building the tentacle is tasked with also building a functioning robo-octopus that ostensibly could be used for a range of applications like underwater search and rescue and exploration. A team of British surgeons are even exploring the idea of a endoscopic tool based on the technology that turns from a pliable tool into a rigid one that could perform surgeries after wending its way through the body.

The Octopus Project (which happens to share a name with a fantastic indie-pop-tronica act–what’s up Austin!) has one 17-inch prototype working and it plans to deliver a full robotic octopus to the EC before its 2013 deadline. Just seven more tentacles to go.