To plan their routes, the crews of transoceanic cargo ships have to assimilate a huge amount of information: from beacons... 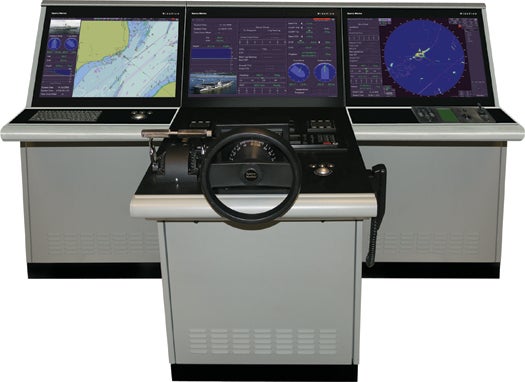 To plan their routes, the crews of transoceanic cargo ships have to assimilate a huge amount of information: from beacons and buoys, weather and navigation satellites, sensors onboard and on other ships, and from private companies that track rogue waves, pirate attacks and other oceanic threats. Nonetheless, many crews still prefer to plot their course with paper charts and make adjustments manually.

Next year, however, the United Nations International Maritime Organization (IMO) will require the crews of all large ships to switch to an electronic navigation system that reads certified digital nautical charts.

The IMO says the transition, which it expects to complete by 2018, will reduce collisions and groundings and also help crews select more clement and less pirateridden routes. Officials from Sperry Marine, the marine equipment arm of Northrup Grumman, say that crews will monitor the data on Electronic Chart Display and Information Systems, or ECDISs, that can integrate all incoming data and drive the ship’s autopilot.

Navigators view constantly updated route simulations and change routes on the fly based on environmental conditions, the ship’s performance characteristics (fuel consumption, hull stress), the presence of other ships, and such scheduling constraints as container delivery time and berth availability.

Radar and GPS track the vessel’s position and display it on the chart, along with the nearby sea traffic. (Electronic sea charts update automatically via a broadband satellite connection to the Internet.

Weather and oceanographic conditions (current and predicted) appear at regular waypoints along the charted route.

Tailored to the specifications of a given ship and journey, the avoider alerts the crew only to those obstacles (seafloor wrecks, ice floes, naval exercises) that could possibly harm the ship or its cargo.

Personnel on shore can monitor onboard sensors for everything from container conditions to engine output as though they were on the ship.

Through a satellite link, the shipping company can access the ship’s operations or “black box” voyage data recorder.

A pirate-threat program continuously assesses real-time information from onboard radar, sonar and cameras, together with warnings from long-range satellites and reports on recent attacks, and issues alerts to the route planner.