The biggest, most sensitive digital camera ever constructed for a space mission has been built by the European Space Agency,... 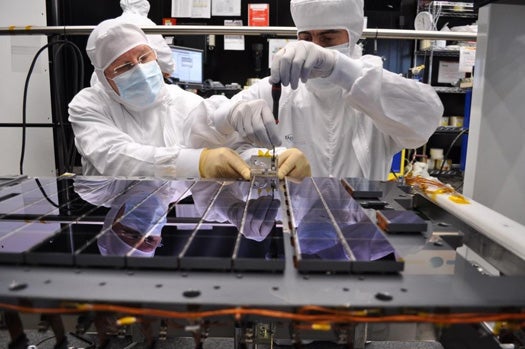 The biggest, most sensitive digital camera ever constructed for a space mission has been built by the European Space Agency, and it makes your Leica look pretty lame by comparison. The Galaxy-mapping Gaia mission’s “billion-pixel array” has been cobbled together from 106 charge coupled devices (CCDs), and the result is some super high-resolution capability. When Gaia opens its eyes in 2013, it will be able to spot stars a million times fainter than the ones humans can see on the clearest night.

In case you were curious, the naked human eye can see several thousand stars on a nice clear night–roughly 2,500 are visible at any given time from any given place on Earth, clouds and light pollution notwithstanding. Gaia aims to map a full billion stars just within our own Milky Way galaxy (nevermind the distant quasars and intergalactic light it will also log).

Over five years, the mission will chart the spectral characteristics, positions, and brightness of these stellar bodies to give astronomers a clearer picture of the Milky Way’s formation and composition, as well as the way it is evolving (fun fact: those billion stars are less than one percent of the total stars in our galaxy).

How? Gaia packs 106 CCDs that make up the “billion-pixel array,” 102 of which will do the actual stargazing while four others maintain the image quality of each of the two telescopes that feed the stereo images to the sensors as well as the critical 106.5-degree angle between the two ‘scopes. The mission also has a fine vantage point picked out: the Earth-Sun L2 Lagrange point some 900,000-plus miles from Earth opposite the sun.