Building, Launching, and Landing a Rover (All Before Going to College)

Usually high-school rocket clubs launch an egg and try to have it land safely. But our teacher suggested that we... 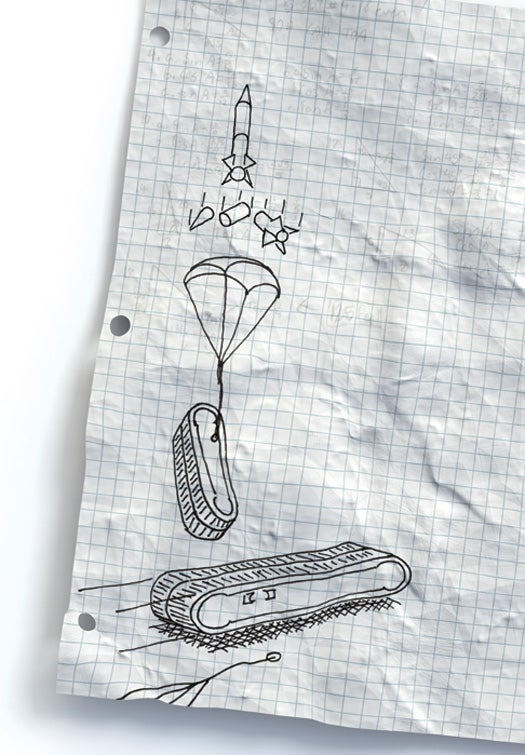 Usually high-school rocket clubs launch an egg and try to have it land safely. But our teacher suggested that we do something harder: enter a competition to build a Mars rover that could be deployed from a rocket. A few of us started working on it. The goal was to launch a robot 1,000 feet in the air, have it land safely on the ground, and then drive it about 30 feet. But the robot had to fit inside a rocket that was just four inches in diameter and 20 inches long—it looked like a stick. Our idea was that when the rocket reaches its highest point, the robot spills out and the parachute unfurls. It’s hard to control how robots land, so we designed ours to be drivable no matter how it touches down.

The first time we launched, the parachute didn’t deploy. The robot fell 2,000 feet and shattered. It wasn’t too big a deal cutting new parts to make another, but we needed to figure out a better release system for the parachute. So I climbed onto my roof and threw the rover off a few times with different parachute designs. When we launched the newer system, the parachute worked great, but the sensors that were supposed to release the parachute after the rover had landed malfunctioned and released 100 feet before touchdown. The rover almost landed in a lake!

I designed and programmed the microcontroller in the robot. The hard part was determining what state the robot was in: inside the rocket, in the air, or on the ground. I set up a system of accelerometers and barometers to detect launch, apogee and landing with accelerations and altitudes. The robot can avoid collisions, navigate, and find an outlet to charge itself.

The whole process took longer than expected because of school and college applications and graduation. But after two years, we entered the competition. We were the first to have a working rover.

Youk and classmates at Thomas Jefferson High School for Science and Technology in Alexandria, Virginia, competed in the Federation of Galaxy Explorers’ Battle of the Rockets in April.