The idea is simple enough: Create a cloud-based software tool that can comb through the entire universe of military intelligence... 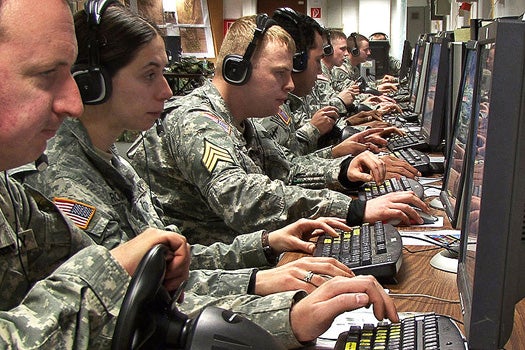 The idea is simple enough: Create a cloud-based software tool that can comb through the entire universe of military intelligence reports for a given region, group, or individual and come back with actionable intel that battlefield commanders can use on the ground, and do it in realtime. But a couple of analysts that have used the system, as well as documentation obtained by Politico, show that the tool is hurting more than it is helping because it doesn’t work properly. And that’s when it works at all.

The Distributed Common Ground System, or DCGS-A as it’s known in milspeak, was conceived as a means of parsing the reams of intelligence reports, drone data, and other battlefield reportage and delivering to commanders the intelligence they need right when they need it–even during actual combat activities.

So, for instance, if a unit is tracking an insurgent the system would allow a commander to pull up all the recent intelligence reports generated about that individual, and plot his activities or known whereabouts on a map for simpler geographical tracking. The commander could also quickly draw connections between that subject and others in the region, helping him to connect the dots and perhaps close in on the subject through his or her associations.

But according to analysts familiar with DCGS-A, it suffers from very fundamental problems. The search function doesn’t work very well. The search program and mapping program aren’t compatible and cannot share data. The hardware is also buggy and full of problems, like frequent crashes or failure to boot properly.

Some lawmakers are calling for the adoption of a second analytical system designed by Palantir Technologies, a Silicon Valley company founded by Stanford computer scientists and PayPal veterans, but thus far the Army and others in elected office have pushed back. The Army says DCGS-A is receiving software upgrades that will solve some of the glaring holes in its functionality. Besides, the brass argues, DCGS-A is already paid for–even though support and troubleshooting costs continue to mount.

Says one former intelligence officer interviewed by Politico: “Almost any commercial solution out there would be better.”