Video: This Morning There Was a Massive Solar Explosion

Regular readers know that PopSci can’t get enough of huge explosions on the surface of the sun. That puts us... 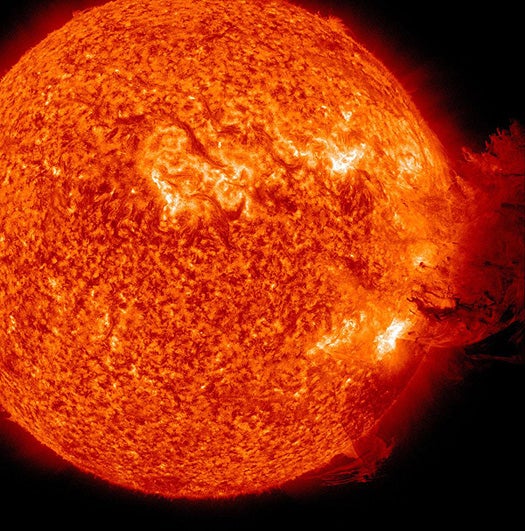 Regular readers know that PopSci can’t get enough of huge explosions on the surface of the sun. That puts us in a pretty good place right now, considering the current solar cycle is moving into a period of increased explosive activity. For those who might not understand why we love solar explosions, this video of this morning’s massive solar flare and ensuing solar prominence should reveal all.

“I’ve never seen material released like this before, such a huge amount that falls back down in such a spectacular way,” says Goddard Spaceflight Center’s Dr. C. Alex Young in the first video below, in which he does a thorough job of explaining exactly what you’re looking at. “It looks like someone just kicked a giant clod of dirt into the air and it fell back down.”

Phil Plait over at Bad Astronomy figures that–and he’s just eyeballing/ballparking this thing here–that something like a billion tons of material was thrust away from the sun before collapsing magnificently back to the surface. This wasn’t the most colossal flare we’ve ever witnessed, or even the most powerful one we’ve seen this year (it ranked as an M2.5, or medium-sized flare, in terms of energy). But the view, courtesy of NASA’s Solar Dynamics Observatory, is spectacular.

And a quick closeup, if that’s not quite enough for you: