Today in Pretty Space Pics: A Glowing Close-Up of a Cosmic Collision’s Aftermath 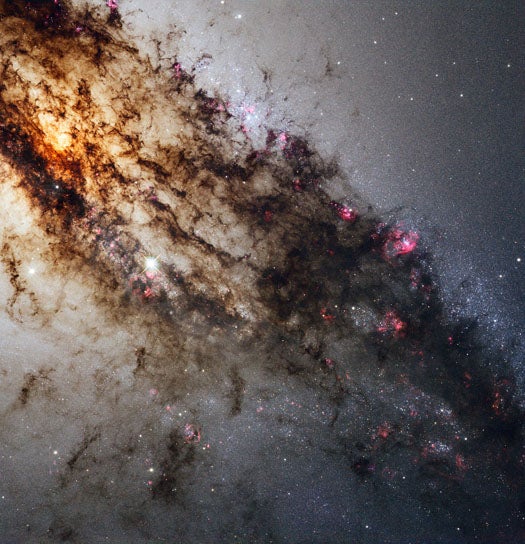 Centaurus A, a.k.a. NGC 5128, is only 11 million light years from Earth, and as such it is a popular, brightly-lit target for amateur stargazers. You can even see it fairly well with common binoculars. But you can’t see it like this. Hubble has gathered the most detailed image ever taken of the nearby galaxy, showing up close the characteristic lanes of dust and dark material that obscure the region.

This composite, captured with the advanced Wide Field Camera 3, shows us Centaurus A in the visible spectrum, the UV spectrum, and in near-infrared, offering a glimpse of the galaxy that even the best earth-bound optical telescopes can’t reproduce. The glow of young stars around the fringes and the abundance of dark, obscuring debris make it look like the aftermath of some kind of cosmic explosion. And that’s actually not so far off.

Features of the galactic disc that lay outside the frame of this close-up suggest that Centaurus A collided with and then merged with another galaxy at some point in the past, generating huge clouds of hydrogen gas and kicking off an intense period of prodigious star birth. You wouldn’t have wanted to be very close to NGC 5128 when that happened, but here Hubble gets us just close enough to take in the dazzling leftovers of this galactic merger.

Get your wallpaper-sized copy via the link below.