Perfect for a Hot Day: A Robot That’s Also a Beer

But won't you feel silly when it scampers away 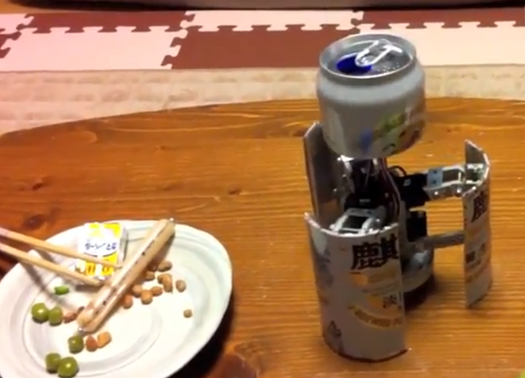 Robots are cool because they’re robots. But a robot is ice cold when it’s also a beer. Ron Tajima has created exactly this: a robot surreptitiously disguised as a beer. The only thing we can see wrong with this clever design is that there isn’t actually any beer inside.

Controlled with a Wii remote, CanBot can do a few pretty cool things. For one, it can transform from an unassuming tallboy to a walking robot that shuffles across surfaces on three servo-powered legs. Those legs can also initiate and control rolling, for a slightly faster mode of transit.

Right, so it’s a beer can that can roll. Perhaps CanBot isn’t the future of robotics, but as you will see in the video below it’s great for charming the hell out of kids and is probably a fantastic conversation starter for your next outdoor barbecue. And this way when you set your beer down and it “disappears,” no one can definitively dispute that maybe, just maybe, it sprouted legs and walked away.