Nuclear power is the most efficient emissions-free energy available. But can it be made safe? Two new reactor designs do just that 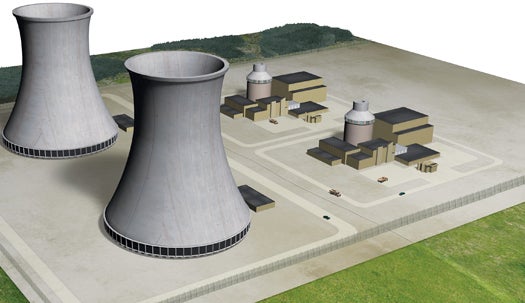 In the aftermath of the Fukushima disaster in March, the appetite for new nuclear power plants slipped to post-Chernobyl lows. Regulators from Italy to Switzerland to Texas moved to stop pending nuclear-power projects, and the U.S. Nuclear Regulatory Commission (NRC) began to reevaluate the safety of all domestic plants. Yet nuclear power still provides 20 percent of America’s total electric power and 70 percent of its emissions-free energy, in large part because no alternative energy source can match its efficiency.

One nuclear plant with a footprint of one square mile provides the energy equivalent of 20 square miles of solar panels, 1,200 windmills or the entire Hoover Dam. If the country wants to significantly reduce its dependence on carbon-based energy, it will need to build more nuclear power plants. The question is how to do so safely.

In the 30 years since regulators last approved the construction of a new nuclear plant in the U.S., engineers have improved reactor safety considerably. (You can see some of the older, not-so-safe ones in this sweet gallery.) The newest designs, called Generation III+, are just beginning to come online. (Generation I plants were early prototypes; Generation IIs were built from the 1960s to the 1990s and include the facility at Fukushima; and Generation IIIs began operating in the late 1990s, though primarily in Japan, France and Russia.)

Like many of the 20 or so pending Generation III+ facilities in the U.S., the Vogtle plant will house Westinghouse AP1000 reactors. A light-water reactor, the AP1000 prompts uranium-235 into a chain reaction that throws off high-energy neutrons. The particles heat water into steam, which then turns a turbine that generates electricity.

The greatest danger in a nuclear plant is a meltdown, in which solid reactor fuel overheats, melts, and ruptures its containment shell, releasing radioactive material. (Want more information? Check out our explainer on how nuclear reactors work–and how they fail.) Like most reactors, the AP1000 is cooled with electrically powered water pumps and fans, but it also has a passive safety system, which employs natural forces such as gravity, condensation and evaporation to cool a reactor during a power outage.

The U.S. has 104 nuclear reactors operating at 65 sites in 31 states, all of them approved before 1980.A central feature of this system is an 800,000-gallon water tank positioned directly above the containment shell. The reservoir’s valves rely on electrical power to remain closed. When power is lost, the valves open and the water flows down toward the containment shell. Vents passively draw air from outside and direct it over the structure, furthering the evaporative cooling.

Depending on the type of emergency, an additional reservoir within the containment shell can be manually released to flood the reactor. As water boils off, it rises and condenses at the top of the containment shell and streams back down to cool the reactor once more. Unlike today’s plants, most of which have enough backup power onsite to last just four to eight hours after grid power is lost, the AP1000 can safely operate for at least three days without power or human intervention.

Even with their significant safety improvements, Generation III+ plants can, theoretically, melt down. Some people within the nuclear industry are calling for the implementation of still newer reactor designs, collectively called Generation IV. The thorium-powered molten-salt reactor (MSR) is one such design. In an MSR, liquid thorium would replace the solid uranium fuel used in today’s plants, a change that would make meltdowns all but impossible.

MSRs were developed at Tennessee’s Oak Ridge National Laboratory in the early 1960s and ran for a total of 22,000 hours between 1965 and 1969. “These weren’t theoretical reactors or thought experiments,” says engineer John Kutsch, who heads the nonprofit Thorium Energy Alliance. “[Engineers] really built them, and they really ran.” Of the handful of Generation IV reactor designs circulating today, only the MSR has been proven outside computer models. “It was not a full system, but it showed you could successfully design and operate a molten-salt reactor,” says Oak Ridge physicist Jess Gehin, a senior program manager in the lab’s Nuclear Technology Programs office.

One pound of thorium produces as much power as 300 pounds of uranium–or 3.5 million pounds of coal.The MSR design has two primary safety advantages. Its liquid fuel remains at much lower pressures than the solid fuel in light-water plants. This greatly decreases the likelihood of an accident, such as the hydrogen explosions that occurred at Fukushima. Further, in the event of a power outage, a frozen salt plug within the reactor melts and the liquid fuel passively drains into tanks where it solidifes, stopping the fission reaction. “The molten-salt reactor is walk-away safe,” Kutsch says. “If you just abandoned it, it had no power, and the end of the world came–a comet hit Earth–it would cool down and solidify by itself.”

Although an MSR could also run on uranium or plutonium, using the less-radioactive element thorium, with a little plutonium or uranium as a catalyst, has both economic and safety advantages. Thorium is four times as abundant as uranium and is easier to mine, in part because of its lower radioactivity. The domestic supply could serve the U.S.’s electricity needs for centuries. Thorium is also exponentially more efficient than uranium. “In a traditional reactor, you’re burning up only a half a percent to maybe 3 percent of the uranium,” Kutsch says. “In a molten-salt reactor, you’re burning 99 percent of the thorium.” The result: One pound of thorium yields as much power as 300 pounds of uranium–or 3.5 million pounds of coal.

Because of this efficiency, a thorium MSR would produce far less waste than today’s plants. Uranium-based waste will remain hazardous for tens of thousands of years. With thorium, it’s more like a few hundred. As well, raw thorium is not fissile in and of itself, so it is not easily weaponized. “It can’t be used as a bomb,” Kutsch says. “You could have 1,000 pounds in your basement, and nothing would happen.”

One nuclear plant provides the energy equivalent of 1,200 windmills or 20 square miles of solar panels.Without the need for large cooling towers, MSRs can be much smaller than typical light-water plants, both physically and in power capacity. Today’s average nuclear power plant generates about 1,000 megawatts. A thorium-fueled MSR might generate as little as 50 megawatts. Smaller, more numerous plants could save on transmission loss (which can be up to 30 percent on the present grid). The U.S. Army is interested in using MSRs to power individual bases, Kutsch says, and Google, which relies on steady power to keep its servers running, held a conference on thorium reactors last year. “The company would love to have a 70- or 80-megawatt reactor sitting next door to a data center,” Kutsch says.

Even with military and corporate support, the transition to a new type of nuclear power generation is likely to be slow, at least in the U.S. Light-water reactors are already established, and no regulations exist to govern other reactor designs. Outside the U.S., the transition could come more quickly. In January the Chinese government launched a thorium reactor program. “The Chinese Academy of Sciences has approved development of an MSR with relatively near-term deployment–maybe 10 years,” says Gehin, who thinks the Chinese decision may increase work on the technology worldwide. Even after Fukushima, “there’s still interest in advanced nuclear,” he says. “I don’t see that changing.”