For all their promise for future space propulsion schemes, plasma drives have had a hard time gaining momentum. A $3.1... 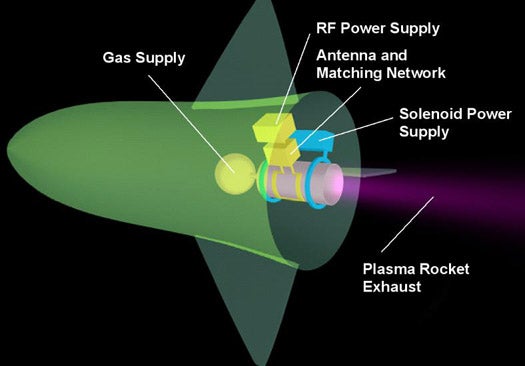 For all their promise for future space propulsion schemes, plasma drives have had a hard time gaining momentum. A $3.1 million grant aims to change that, giving Australian National University physicists a lift that should help them see their plasma engine all the way to orbit aboard a European satellite within two years.

ANU’s Plasma Research Lab is turning ten years of research into the Helicon Double Layer Thruster (HDLT), and if they can get it working consistently in the next two years it could head to space in 2013 as part of a collaboration between ANU, Surrey University, and European space/aerospace behemoth EADS-Astrium.

Working plasma drives are sought after for their unparalleled bang-for-buck efficiency. Unlike chemical rockets that require huge amounts of propellant to achieve thrust, plasma engines can produce high exhaust velocities from relatively minuscule amounts of fuel. Researchers think the HDLT could eventually derive a five-hour burn in space from a single gram of propellant–the amount that chemical engines burn in the blink of an eye.

How? Simply put, the HDLT uses a shaped magnetic field to guide and accelerate a superheated gas like Krypton or Xenon (the plasma) to high exhaust velocities, then expel if from a thruster (one of the key challenges here is controlling that plasma without burning up the engine itself). Plasma engines don’t generate the kind of explosive acceleration that solid fuel thrusters do, but because of their superior fuel-to-thrust ratios, they can operate for far longer on far less fuel, leaving more room for payloads.

However, plasma drives aren’t powerful enough to lift payloads from Earth. So the overarching idea is to place satellites or spacecraft in space on the backs of chemical rockets, then allow plasma drives to take over propulsion once there. Widespread deployment of the technology is still years away, but ANU researchers hope to be using their HDLT to keep a satellite on-station before mid-decade. If they can get that working smoothly, the first deep-space-faring spacecraft propelled by plasma engines may not be too far behind.