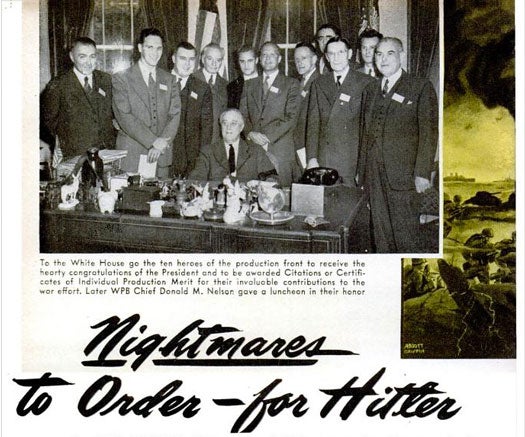 After celebrating the 67th anniversary of D-Day this week, it’s only fitting that we publish a gallery documenting World War II-era PopSci. A warning, though: this was the 1940s, so practically nothing in here conforms to our modern-day notion of political correctness. Some of these headlines may sound a little extreme, but rest assured, we took care to elaborate on the idea from a scientific standpoint.

First, let’s go back three years earlier to 1942, when the Germans unveiled their 88-mm tank gun in Libya and Egypt. After the American and British press acknowledged its spectacular showing, we ran a story to assure our readers that our weaponry could vanquish the Nazi troops any day. “American Guns Do Not Lack a Punch, They Are — Tank Killers With a Wallop!” we proclaimed.

Like “Tank Killers,” “Nightmares to Order for Hitler” coasted on the nation’s optimism for an Allied victory. Other features, such as a spread titled “This is How a Defenseless America Could Be Invaded” reflect the apprehension Americans felt while watching footage of bombings in Europe and the Pacific.

If there’s one feature that still holds up today, it’s an illustrated narrative titled “Yankee Ingenuity Licks Prison-Camp Hardships.” Here, Major William Orris describes how he and his fellow POWs survived in a Luftwaffe prison camp by fashioning kitchen devices out of old cans and tin sheets–a combination of The Great Escape and MacGuyver, if you will, but more importantly, a compelling story about how simple gadgetry directed these men toward a certain future.

When the German 88-mm tank gun received spectacular press following its performance in Libya and Egypt, British and American readers began to fear that the Nazis had developed a weapon unmatched by anything the Allies had to offer. This was simply not true. The German 88-mm had an intimidatingly long barrel and could fire shells at around 2,800 feet a second, but that wasn’t anything our 3-inch AA gun couldn’t do. The German weapon couldn’t fire rockets, as the public feared; if anything, their antiaircraft weapon only temporarily “outdid” ours because their armies had managed to managed to beat the British and Americans in converting AA guns to all-purpose weapons.

The Allies had much to celebrate after winning the Second Battle of El Alamein, which destroyed 30 percent of the Axis forces and pushed Rommel’s troops from Egypt to Tunisia. In our imaginations, Hitler reacted something like this:

“That morning Hitler’s breakfast consisted solely of the fringe of his bedroom rug, which he tore off in great mouthfuls in frustrated rage. They can’t do this to me–me, The Fuehrer!”

The Second Battle of El Alamein was the Western Allies’ first successful offensive against the Axis, due in large part to a ten-person production team responsible for developing top-notch weaponry and equipment. These contributions included Clinton R. Hanna’s tank gunnery, which could hit a target two miles away while driving at full speed; Ed Tracy’s field-checking set, which could test a bomber’s instruments three minutes before take-off; and James A. Merrill’s idea to use women’s hosiery as bandaging for damaged fuel tanks.

Now here’s a crazy idea: Instead of attacking Japan’s cities, why not bomb its volcanoes? Harold O. Whitnall, Professor of Geology and Geography at Colgate University, was convinced that Japan’s vulnerability to natural disasters (eep) could work to the Allies’ advantage. According to his calculations, a strategically-aimed bombing raid on Japan’s volcanoes could initiate en eruption by dislodging the hardened lava blocking molten reservoirs. If that weren’t terrifying enough, Whitnall also suggested that the eruptions would induce powerful earthquakes throughout the region. Naturally, other scientists were skeptical of Whitnall’s proposal, so he in turn accused them of being too conservative.

“There is no reason why these superbombs shouldn’t be tried on Japanese volcanoes,” he said. “The targets are many, and the openings are wide.”

What’s the first thing you should do after winning a war? Answer: prepare for the next one. Despite our certainty of an Allied victory, we knew better than to assume invincibility. The map pictured on the left shows how the country’s soft spots could be compromised. Secret bases in Mexico could bomb the Southwest, while enemies could fire oil wells in Los Angeles. Up north, bomb raids could burn grain fields while planes from a secret base in Canada could take Detroit and its rail terminals. East Coast metropolises like New York City and Washington, D.C., were of course susceptible to air and sea attacks.

To avoid such a catastrophe, the nation would have to bolster its armies and stockpile weapons while adhering to an international council of world powers. Our suggestions included requiring universal military service for high school graduations and developing superbombers (or high-range missiles) that could hit targets on another continent.

The Avro Lancaster bomber, a heavy bomber commissioned by the Royal Air Force, gained international renown after attacking German dams during Operation Chastise in 1943. The breach and consequent flooding earned the Lancaster its nickname of “Dambuster,” and the plane later went on to become the most successful World War II night bomber. The model pictured here had an eight-ton bomb capacity with room for blockbusters, along with 10 medium-caliber machine guns attached to its four turrets.

Toward the end of the war, we introduced readers to the practice of kamikaze, also known as suicide attacks by Japanese pilots. The idea sounded ludicrous to those unacquainted with the culture, but we explained that that picking death over defeat was integral to Japanese tradition. “Out of the depths of savagery and superstition the Japanese have forged a fantastic weapon to hurl at their American enemies by land, sea, and air.”

In this feature, we went into detail on how kamikaze fighters trained for their mission. After graduating from cadet school, the pilots would be given a feast, where geishes with white faces (to signify death) would entertain them for days. During the mission itself, the pilot would load up his plane with explosives and fly directly into a carrier.

So did kamikaze pilots inflict enough damage to justify their loss? Historians disagree on the exact numbers, but according to the U.S. Air Force website, around 2,800 kamikaze fighters sank 34 Navy ships, killed 4,900 sailors, and wounded over 4,800. Those numbers might sound sizable, but they clearly weren’t enough to help Japan win the war.

As you can expect, life in a German prison camp was pretty miserable, but plenty of POWs (who called themselves “kriegies,” short for Kriegesgefangenen — German for prisoners of war), managed to survive by making their own ovens, percolators, and pots using used cans and tin sheets. Major William Orris, a POW from the Stalag Luft III camp (famous for the prisoner escape showcased in The Great Escape) told us how he and his fellow kriegies got by: They killed and ate cats, they fashioned their own cracker mill out of nails and a can, and they even sold scarves they knit themselves using bucket handles as needles.

During their internment, the kriegies were allowed to exchange items at a store in nearby Sagan, Poland, which afforded them cigarettes and basic food items. They were also given limited access to Red Cross packages, which contained canned food; however, the men were forced to punch holes into the cans upon receipt to prevent stockpiling.

After the Russians arrived nearby, the POWs were marched out of the camp in a snowstorm. Major Orris and a friend escaped into the woods, where they hid out with other POWs until stumbling on Allied troops. At first, Orris and his friends laid low, fearing that the tanks belonged to Germans, but the truth became clear once the soldiers’ faces came into view.

“‘We just about cried,’ says the Major, ‘because when we saw that they were Negroes, we knew we were free.'”

Up close, this inflatable tank is clearly nothing more than a dummy, but it sure fooled the Nazis when they spotted it from far away. As you can imagine, these tanks were easy to store and maneuver, their only disadvantage being that they deflated quickly once hit with artillery.

During the Second World War, both Axis and Allied troops employed “spoofs” out in the field. Operation Fortitude used inflatable rubber tanks and plywood artillery to fool the Germans into believing that the Allies would invade Pas-de-Calais instead of Normandy. Meanwhile, in the Pacific Rim, the Japanese armies fashioned a dummy tank out of volcanic ash to mislead American infantry during the Battle of Iwo Jima.

What’s wartime without hope for its end? We asked readers to devise postwar uses for America’s trusty jeep, and the winning ideas were illustrated six months later in this feature anticipating our victory. The first prize design, which you can see on the right, imagined the jeep as a versatile farm vehicle with a range of attachments. Another prize winner designed a fisherman’s “folly” vehicle that could carry a canoe, a roller tent, and a built-in camp kitchen to backwoods streams. Another honorable mention reinterpreted the jeep as a speedy fire truck that could attach hoses to hydrants before the bigger engines arrived.