Sometime between 8:00 p.m. and midnight EST tonight–weather permitting, of course–the U.S. Air Force plans to do something it rarely,... 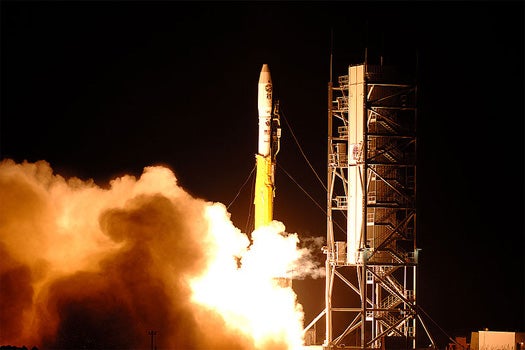 Sometime between 8:00 p.m. and midnight EST tonight–weather permitting, of course–the U.S. Air Force plans to do something it rarely, if ever, does: launch a reconnaissance satellite that’s cheaper and less sophisticated than the one it launched previously. When the AF’s 80,000 pound Minotaur rocket launches from Wallops Island, Va., it will carry into space the first Operationally Responsive Space satellite (ORS-1), part of a larger initiative to put cheaper, smaller, and simpler intelligence satellites into space.

ORS-1 cost the AF less than $100 million (that’s cheap for a spy satellite) and went from drawing board to launch-ready in about 30 months (also impressive). It’s headed for a 250-miles-high orbit that will be convenient for peering into the Af/Pak region where U.S. troops are operating. It sports no fancy new technology, but the same SYERS-2 sensor package and software that is carried by manned U-2 spy planes.

The launch marks the culmination of a shift in the way the U.S. military approaches its space recon technology and the strategic and financial costs associated with it. The ORS office has been given the task of shrinking the size and price tag associated with lofting reconnaissance hardware into orbit–a priority that unsurprisingly moved up the AF’s list about the same time China started testing anti-satellite missiles.

The idea is two-fold. For one, cheaper satellites means more satellites, which should eventually translate into satellites that are more responsive to troops on the ground. Right now, any old platoon in Afghanistan can’t just call in a satellite to provide intel on the ground. That will change. And of course, there’s those missiles. The military would like to make it cheaper, easier, and faster to put a satellite into orbit so if one gets shot down by an enemy force, another can quickly replace it. Make the satellites plentiful at a fraction of the cost of the missiles, and satellite warfare becomes uneconomical.

ORS-1 was scheduled to launch aboard its Minotaur last night, but the countdown was scrubbed due to scattered bad weather in the region. But if you’re on the East Coast, you could be in for some pre-Independence Day fireworks at some point this week. Wallops will attempt to launch ORS-1 every evening from now through July 10 until the weather agrees, meaning East Coast-ers could catch a glimpse of a brilliant sunset rocket ascent tonight or sometime in the next few days. The three-hour launch window is expected to re-open tonight at 8:28 EST.