A swarm of intelligent, autonomous robots from Georgia Tech may soon be leading the charge into dangerous and uncertain situations,... 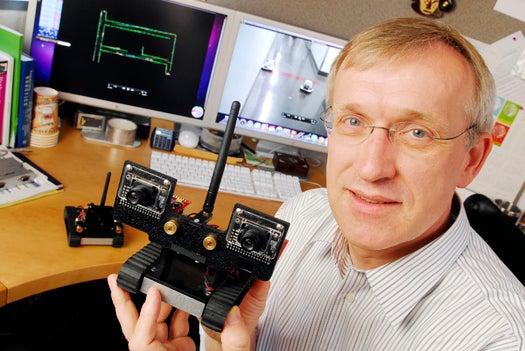 A swarm of intelligent, autonomous robots from Georgia Tech may soon be leading the charge into dangerous and uncertain situations, providing valuable mapping intel to first responders, military, or police behind them. A team of researchers there have developed a team of small, rolling robots that can autonomously communicate with one another to quickly build a detailed floor plan map of an entire structure and beam it to nearby humans.

Working alongside researchers from UPenn, CalTech, and NASA’s Jet Propulsion Lab, the Georgia Tech team is part of an Army Research Laboratory research initiative called MAST (Micro Autonomous Systems and Technology). The goal is to create technologies that will help military and first responders deal with threats via small robots working in teams or swarms to gather information from areas that might be too dangerous for humans to enter.

The robots developed by the Georgia Tech MAST processing team do so using advanced vision-based techniques borrowed from JPL and GT’s own navigation technology. Their ‘bots require just two types of sensors: cameras for locating doors, windows, and other features, and a laser scanner for measuring walls. An inertial sensor also provides information about each robot’s movements.

That inertial data is key. GPS enables handlers to locate their robots–when the can get a satellite signal. But inside structures those GPS signals are often blocked. On-board computers integrated into GT’s robots mesh data from the robots’ sensors into a map via a technique known as simultaneous localization and mapping (SLAM), which allows the robots to keep track of where they are in space by tracking their own movements (rather than relying on GPS).

Using this system, the robots work as a team with no leaders or followers, but a common objective between them. Each unit is capable of recruiting others toward that objective. That is, if two robots come to a T-intersection, one will basically say “you go left and I’ll go right.” That sort of programming allows a swarm of bots to quickly assemble a map much faster than a single robot could.

The next step: add some aerial robots to the team. An experiment planned for next year will add small autonomous flying robots capable of locating a particular building and determining the potential entry points, so it can guide the mapping robots inside.