Virgin Galactic just keeps on ticking off the milestones on its way to becoming the first commercial company to take... 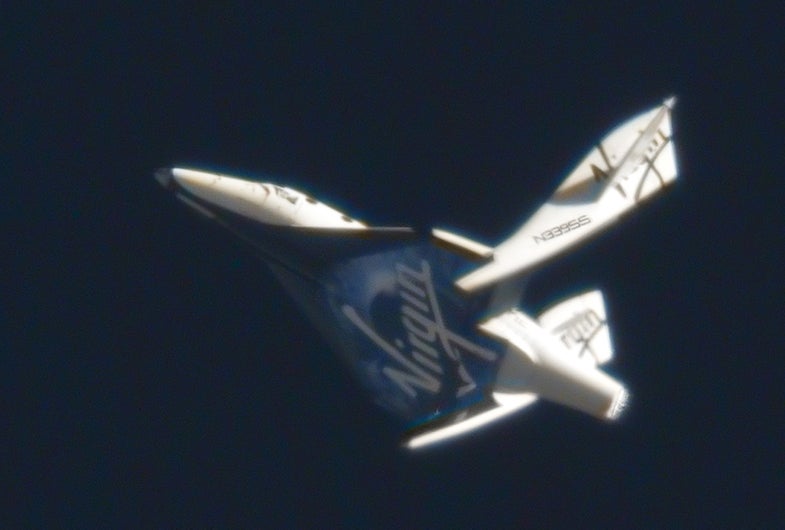 Virgin Galactic just keeps on ticking off the milestones on its way to becoming the first commercial company to take tourists on high-altitude flights to suborbital space and return them safely through the atmosphere to Earth. In the video below, we actually get to see Virgin’s SpaceShipTwo (aka VSS Enterprise) making its first “feathered” flight.

“Feathering,” as it is known, is probably the biggest innovation integrated into SpaceShipTwo’s design. In the feathered position, the entire tail section of the plane rotates upward about 65 degrees, creating a different aerodynamic shape that is highly stable yet creates tremendous drag to slow the aircraft down during re-entry. Though that drag is pretty significant, the light weight of the aircraft keeps the skin temperature from rising too high, circumventing the need for heat shields and other thermal protection.

Moreover, when feathered correctly the aircraft is so stable that the pilot can more or less take his hands off the sticks and let the aircraft work its way through the atmosphere naturally, based purely on its aerodynamic shape. That’s a huge safety feature, as the pilot doesn’t have to maintain a specific degree of entry or rely on a sophisticated fly-by-wire computer.

The test shown below took place May 4 and did not actually include a trip to space. But this first feathering test, which began when SpaceShipTwo was dropped from the carrier aircraft WhiteKnightTwo at 51,500 feet, proves that Burt Rutan’s feathering design actually works as well in the air as it did on paper. Where you see the aircraft feather, keep in mind that it is basically falling straight down at 15,500 feet per minute, a rate that is slowed significantly by the aerodynamic drag generated by the feathering configuration.