Exoskeletons are valuable for several reasons — they can help military personnel carry a heavier load, and they can be... 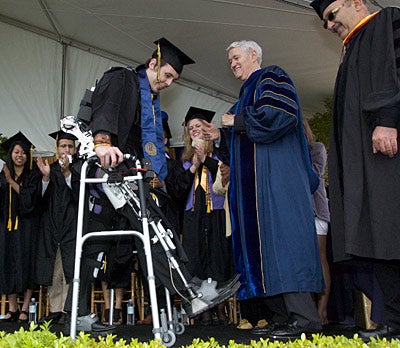 Exoskeletons are valuable for several reasons — they can help military personnel carry a heavier load, and they can be used all in the name of fun. But this one might be the best use of all: A 22-year-old paraplegic college graduate, paralyzed since a 2007 car crash, used an exoskeleton to walk across the stage Saturday to receive his diploma.

Austin Whitney, a history and political science major at the University of California-Berkeley, spent nine months working with Homayoon Kazerooni, creator of the HULC exoskeleton and the eLegs rehabilitation system.

Whitney used a controller switch on a walker to direct the exoskeleton, which was strapped around his legs. It swung his legs forward, moving him toward Chancellor Robert Birgeneau and a grinning Kazerooni.

The exoskeleton was a stripped-down, basic version of previous walking machines Kazerooni has designed. It will cost about $15,000, roughly the same as a souped-up motorized wheelchair, according to the San Francisco Chronicle. By contrast, the eLegs system unveiled last fall will cost about $90,000. Like the eLegs, it requires the use of a power pack and a crutch or walker. Whitney controlled the system using a switch on the walker, enabling him to take a step, stand up or sit down.

Whitney wrapped his car around a tree in July 2007 after sharing some drinks with his friends, about a month after graduating from high school. His spine was severed above his hips, paralyzing his legs. He quit drinking, and 10 days after his release from the hospital he enrolled in community college, eventually transferring to Cal. He worked with Kazerooni’s lab to improve the prototype — it has flatter feet, telescoping legs and locking hand controls, thanks to his input, the Chronicle reports.

He thought he would never walk again, he said after the ceremony.

“It was truly the greatest gift anyone has ever given me,” he said.