The folks at Martin Jetpack wanted to test their ballistic parachute, but there was a problem–their previous tests had only... 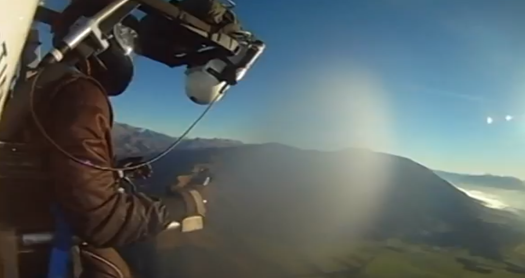 The folks at Martin Jetpack wanted to test their ballistic parachute, but there was a problem–their previous tests had only taken their prototype “jet pack” up to very low altitudes, heights too low to deploy their safety ‘chute. No guts, no glory, as it is said. The video below captures the Martin Jetpack climbing to 5,000 feet in a 10-minute flight (both records for the aircraft as far as we know).

The flight was piloted remotely from a chase helicopter (the “pilot” you see is a weighted dummy), which tailed the ducted fan-propelled aerial vehicle through a six-minute climb to 5,000 feet before the pilot took it down to 3,000 feet and popped the emergency chute. Martin reports that while the aircraft sustained some damage upon landing, the pilot likely would’ve walked away. A successful flight all around, and man, what a view.