Video: Icelandic Ash Plume Blasts Through the Cloud Layer, as Seen from Space

It’s no Eyjafjallajokull (neither when measured by impact of eruption, nor in difficulty of pronunciation), but Iceland’s Grimsvötn volcano is... 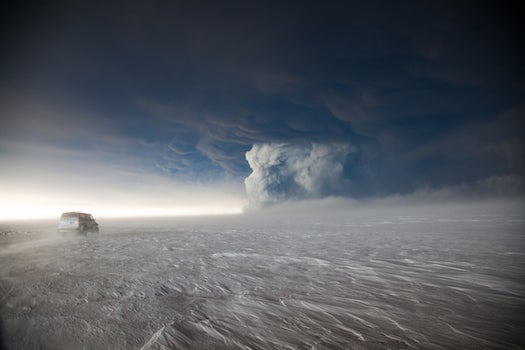 GRIMSVOTN, ICELAND - MAY 23: The eruption of the Grimsvotn volcano sends thousands of tonnes of volcanic ash into the sky on May 23, 2011 above Iceland. The cloud has forced the closure of Icelandic airspace and spread fears of a repeat of the global travel chaos that was caused by last year's Icelandic eruption, although authorities inisist that this Grimsvotn poses a lesser threat. (Photo by Jon Magnusson/Getty Images). Jon Magnusson
SHARE

It’s no Eyjafjallajokull (neither when measured by impact of eruption, nor in difficulty of pronunciation), but Iceland’s Grimsvötn volcano is still establishing a visual presence over the North Atlantic. You can even see it from space. The animation below shows Grimsvötn’s plume piercing the cloud layer above Iceland and spreading its ash plume in the atmosphere above it.

The animation below is stitched together from images captured by the US GOES 13 satellite, which is on an orbital path somewhat to the west of Iceland. For the purposes of snapping images of a massive ash plume blasting through the cloud layer, that positioning might be ideal, as with the horizon in sight you can get a better feel for just how high this plume is rocketing (it’s 7 miles up right now).

Still not feeling the magnitude? That blue line that appears in the final frame shows the outline of Iceland. Yeah, it’s a big plume.