The robotics engineers at DLR, the German Aerospace Center, have a history of violent behavior with their mechanical creations —... 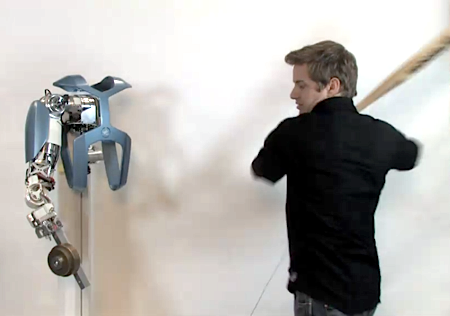 The robotics engineers at DLR, the German Aerospace Center, have a history of violent behavior with their mechanical creations — earlier this year, we saw them smash a robot’s hand with a hammer, and last year we watched brave engineers give a robot a knife and let themselves be stabbed. Now they’ve taken to whaling on the ‘bots with a baseball bat.

The point is to test the DLR Hand Arm System, an ultra-tough system with 52 motors and joints that can absorb energy the way human ones do. The robot’s toughness could prevent breakdowns in industrial settings, home use or any other place where a robot might bump into something.

After a whack with a baseball bat, the arm worked just as well as before, gently touching a yellow ball.

The arm consists of newly designed floating spring joints, which help dissipate energy better than a rigid structure could. They have two motors, one to control the joint and another small one to adjust its stiffness. The hand also has 38 tendons tougher than Kevlar, according to IEEE Spectrum. The tendons are attached to a spring-based elastic mechanism, which also allows the fingers to release and store energy.

IEEE Spectrum explains in more detail, reporting on the robot from the IEEE International Conference on Robotics and Automation in Shanghai.

Watch the arm take a beating below, to the apparent glee of its human handler.