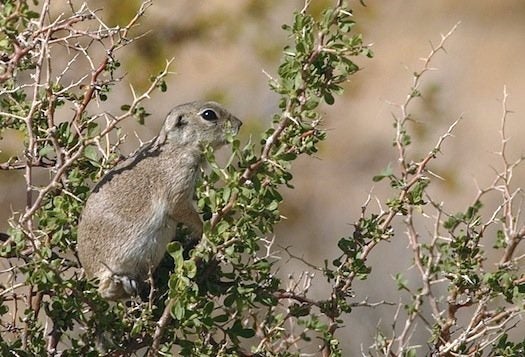 Predators of the threatened Mojave ground squirrel include badgers, coyotes, snakes, falcons, hawks, and U.S. military aerial strikes. That’s because the squirrel makes its home in a section of California’s Mojave Desert also used by the Air Force as a practice area. But the military has to make sure not to accidentally bomb the squirrels, them being threatened and all, and expends a lot of time and money trying to find them so as to avoid that. Frustrated, the Air Force recently put out a call for proposals that might make tracking these animals–and, in turn, lots of others–easier.

The military specifically wants a sort of acoustic fingerprinting technology. Though often very effective, acoustic tracking–registering the unique sounds animals make, rather than, say, visual cues like zebra stripe bar codes–is usually limited to birds and cetaceans (whales, dolphins). There’s no particular reason for that limitation, especially in this case, as Mojave ground squirrels (really, squirrels in general) are tremendously talkative animals, which should make them easy to track with sound.

The basic idea is to keep track of all of the Mojave ground squirrels within the Air Force’s danger zone, identifying them based on their distinctive calls. That data could then be turned into a map, showing where to bomb and where to avoid. Once it’s in place, it could theoretically be used for all kinds of mammals and other animals, which could be very useful for researchers and ecologists seeking to track them.