It’s not uncommon for U.S. military forces to destroy an aircraft downed in a foreign land, but U.S. Special Forces... 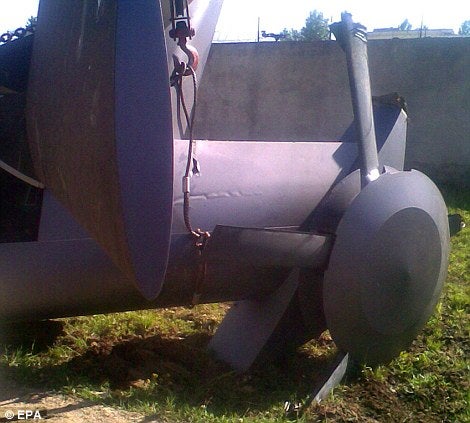 It’s not uncommon for U.S. military forces to destroy an aircraft downed in a foreign land, but U.S. Special Forces had particular cause to blow up the ill-fated helo that participated in Sunday’s raid on Osama Bin Laden’s compound in Pakistan. Apparently, it was a secret stealth helicopter, the design of which U.S. military commanders would not be keen to share with the Pakistanis or anyone else.

For analysis we turn to Bill Sweetman over at Aviation Week’s Ares blog, who knows much about such things:

It was a secretly developed stealth helicopter, probably a highly modified version of an H-60 Blackhawk. Photos published in the Daily Mail and on the Secret Projects board show that the helicopter’s tail features stealth-configured shapes on the boom and tip fairings, swept stabilizers and a “dishpan” cover over a non-standard five-or-six-blade tail rotor. It has a silver-loaded infra-red suppression finish similar to that seen on some V-22s.

The special ops team succeeded in destroying the critical technology, though the tailboom survived (it ended up outside the compound wall). It’s from this that many journalists and defense wonks were trying–with much trouble–to identify the downed aircraft.

But, as Sweetman notes, the images from Pakistan do answer some questions about Sunday’s raid. While we may not get the details on exactly what technologies the modified Blackhawks were packing, we do now have a pretty good idea of why Pakistani air defenses didn’t see them coming.