Hydrogen fuel cells have exploded onto the market as convenient chargers for your handheld devices. Plugged in via USB ports,... 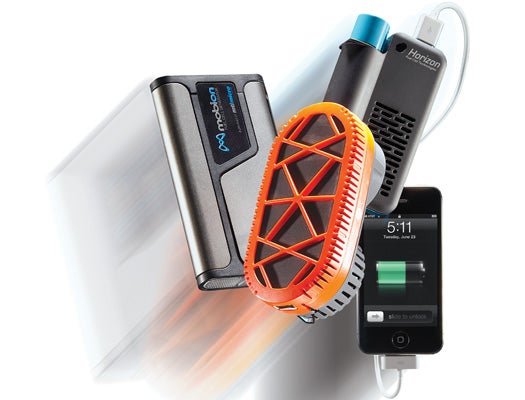 Hydrogen fuel cells have exploded onto the market as convenient chargers for your handheld devices. Plugged in via USB ports, the cells don’t have to rely on wind or sun to stave off irritating “battery low!” messages.

Hydrogen fuel cells combine captive hydrogen with oxygen from the air to produce an electrical charge. Large fuel cells in development for cars often use compressed hydrogen gas, which can be explosive. Now companies have developed several other ways to store hydrogen, making chargers safe enough to stash in your carry-on bag.

Unlike portable solar- and wind-powered chargers, fuel cells work no matter what the weather or time of day, making them especially helpful for beach excursions, hiking trips and emergencies. They’re also nearly universal, charging anything with a USB port, including smartphones, GPS units and MP3 players.

MTI Micro Mobion
The Mobion uses disposable cassettes of methanol. The liquid flows through a catalyst membrane, causing a reaction that produces hydrogen. One cassette can charge a smartphone about seven times.

myFC PowerTrekk
The PowerTrekk combines water with disposable packs of sodium silicide powder to release hydrogen. Extra charge is stored in its lithium-ion battery. One pack plus the battery can charge two smartphones.

Horizon MiniPAK
Refillable cartridges of hydrogen stored as solid metal hydride run the MiniPAK. Each cartridge has the energy of 10 AA batteries, enough to charge a smartphone twice or an iPod about four times.