Plenty of people found out about the demise of Osama bin Laden through Twitter — but for most of them,... 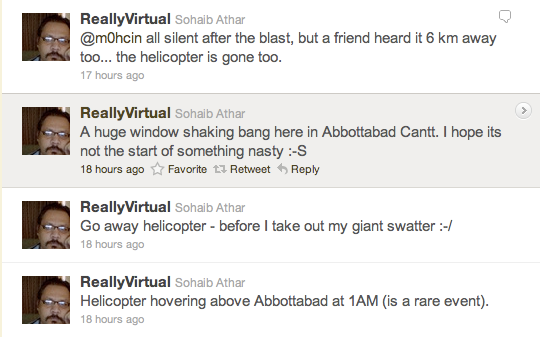 Plenty of people found out about the demise of Osama bin Laden through Twitter — but for most of them, it was through rumors at first and then snippets of media reports. In Abbottabad, one Twitter user provided live commentary as the raid was happening near him. Without realizing it.

Pakistan-based IT consultant Sohaib Athar noticed a helicopter hovering over Abbottabad around 1 a.m. local time, and noted this was a “rare event.” Then a “window-shaking bang,” and news that a helicopter had crashed.

At first he tries to guess at what happened — maybe a drone was involved, maybe it was a UFO. But as the news slowly emerges, Athar realizes the enormity of what he had tweeted.

“Uh oh, now I’m the guy who liveblogged the Osama raid without knowing it,” he wrote. Moments later: “And here come the mails from the mainstream media … *sigh*”

His timeline of events seems to match official reports of what took place yesterday, as a Navy SEAL strike team raided a compound where bin Laden was hiding. Four helicopters were involved and one was apparently damaged by enemy fire, according to various accounts.

Athar’s full Twitter feed gives an interesting glimpse into the action, the fallout as the news spreads through the affluent Islamabad suburb, and of the exhaustion caused by Athar’s unwitting historical commentary.