A California company is working on a new airship design that could solve one of the biggest problems facing buoyancy-aided... 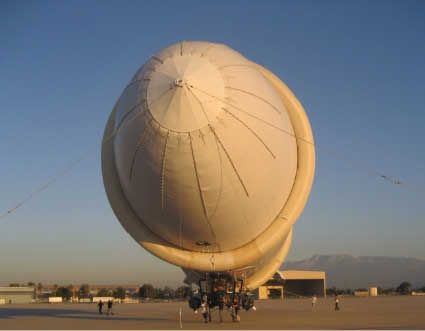 A California company is working on a new airship design that could solve one of the biggest problems facing buoyancy-aided aircraft — how to control floatworthiness without wasting fuel.

Aeros, founded by Russian-born entrepreneur Igor Pasternak, is working on a rigid-hulled airship that varies its buoyancy to take off and land vertically. By compressing and decompressing helium, the density in the ship can be varied as a means to control the ship’s static heaviness. Static heaviness is the ratio of buoyancy to gravity, and it’s the main variable that must be controlled to fly a ship along a predictable path.

Buoyant ships can float in the air because their fuel, usually helium these days, is lighter than the air. Any kid who has ever lost a balloon at the county fair understands, and rues, this phenomenon. The buoyant gas is counterbalanced by fuel, cargo or other ballast, allowing the ship to fly at a controlled altitude. But in order to move forward, a ship has to burn fuel, and this reduces its weight — so it would gain altitude. To balance the buoyancy, airships must vent their precious helium or let in regular air, but this wastes an expensive and diminishing resource.

Modern airship designs deal with this by employing non-rigid hulls, multi-lobed hulls containing different gases, taking on water ballast at cargo unloading docks, and so on. But Aeros uses a compression system instead, called Control of Static Heaviness (COSH). It involves a rigid airframe and a membrane containing helium gas. The membrane will contain pressurized tanks: More pressure in the tanks makes the vehicle heavier, and less makes it lighter, Aviation Week explains.

In 2012-2013, Aeros will test a ship called the Pelican, a 230-foot-long, 600,000-cubic-foot rigid air vehicle with the COSH system. The Pelican project is funded by the Pentagon’s Rapid Reaction Technology Office, after DARPA’s Walrus contest went the way of the dodo. Walrus was intended to loft an entire military battalion and all its equipment and plop it down somewhere else, but the project was later cancelled because it wasn’t feasible — the ship would have been so huge that it couldn’t fly above 10,000 feet, well within the range of surface-to-air weaponry.

Pelican still has some issues to iron out, such as providing enough lift to take off with a heavy load; the Register explains further. But on its face, changing gas density to control buoyancy seems like a novel solution to an old problem.