Unveiled: The Most Detailed 3-D Map of Local Universe Ever Created

Mapping the universe and its billions of galaxies is a tedious business, but a project spanning more than a decade... 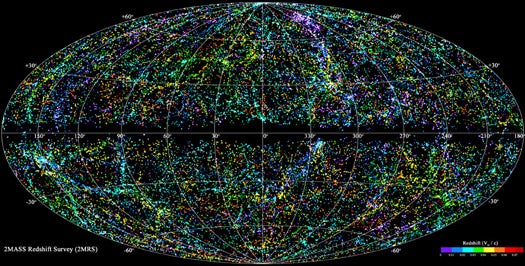 Mapping the universe and its billions of galaxies is a tedious business, but a project spanning more than a decade and mashing up near-infrared sky surveys with painstaking redshift analysis has produced the wold’s most detailed 3-D map of the local universe. Reaching out to a distance some 380 million light-years from our own solar system, the 2MASS Redshift Survey (2MRS) was presented today at the 218th meeting of the American Astronomical Society.

The project mapped more than 43,000 galaxies picked from the Two-Micron All-SkySurvey (2MASS), which scanned the entire sky in three near-infrared wavelengths. But 2MASS alone offered an incomplete picture. To achieve the third dimension, astronomers needed to know not only how galaxies relate spatially on a flat map, but how far away they are from Earth and each other. So the 2MASS Redshift Survey began measuring the galaxies’ redshifts, one by one, using two telescopes in Arizona and Chile.

Redshifting is the way in which a galaxy’s light is stretched into longer wavelengths by the expansion of the universe. The farther a galaxy is from Earth, the greater its redshift. By analyzing those measurements, the 2MRS was able to achieve that important third dimension, and to produce the map you see above.

But 2MRS isn’t just notable for mapping faraway galaxies. It also made great strides closer to home. Regions nearer the Milky Way tend to be difficult to observe, as they are obscured by the dust and gas in our own galaxy. The near-infrared wavelengths employed by 2MASS are better at penetrating this dust, giving us a better look at our own galactic neighborhood.

A higher res version of the pic is available here.