Largely thanks to Nintendo’s 3DS portable gaming system, glasses-free 3-D has entered the mainstream. Unfortunately, it has also introduced the... 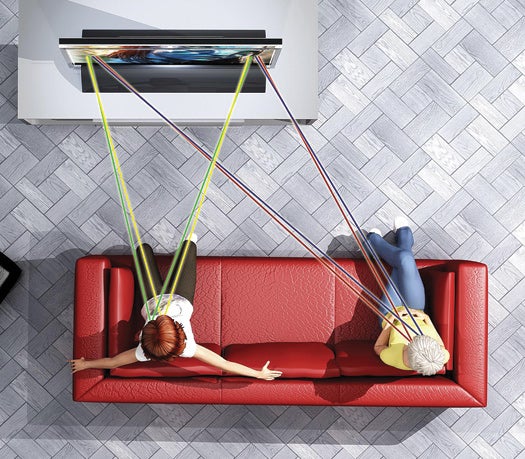 Largely thanks to Nintendo’s 3DS portable gaming system, glasses-free 3-D has entered the mainstream. Unfortunately, it has also introduced the world to the technology’s many limitations. But a team from MIT’s Camera Culture Group at the Media Lab is rethinking glasses-free 3-D, and it may have come up with a method that could drastically reduce power consumption, offer more perspectives to multiple users, and expand the viewing angle all without compromising picture quality or brightness.

Glasses-free 3-D essentially works like this (visual aids and a more thorough primer here): for each frame, two images have to be created, one tailored for the left eye, one for the right. Those images are sliced into thin vertical segments and interwoven. The images are then viewed through a kind of filter–called the parallax barrier–that essentially is a screen with a bunch of vertical slits in it.

The parallax barrier is tuned to the horizontal separation between the human eyes. So with the barrier in place–and if the viewer is in the correct spatial orientation in relation to the screen–the left eye only sees the image tailored for it, and the same is true for the right eye. Like magic, a 3-D image emerges.

But limitations abound. For one, the parallax barrier in devices that have a 2-D/3-D option is usually a second LCD screen placed atop the standard, 2-D display (this is how the 3DS works). Two screens eat up more power, plus the rear screen must operate at higher brightness to compensate for all of the light being blocked by the barrier, cutting battery life in half (or sucking more power from the wall). The vertical barrier also restricts viewing angles and doesn’t allow for multiple perspectives. If you’re not sitting more or less in front of the screen, the 3-D illusion collapses. For portable devices like the 3DS where the screen might be rotated or tilted, this is particularly problematic.

The MIT team solves this by dispensing with the usual (and restrictive) vertical-strip parallax barrier. Their HR3D method uses a dual LCD method like the 3DS, but instead of that vertical-stripe pattern their barrier consists of thousands of small slits tailored to the image underneath. As the image changes, so does the barrier. This requires a lot of math, fueled by an algorithm they created to constantly change the barrier’s orientation to let light pass in a variety of ways.

This means not only does their HR3D barrier let through more light in more ways (requiring less brightness and enabling less power consumption), but it also can provide multiple 3-D perspectives and a wider viewing angle. Basically, it cleverly fixes most everything we hate about glasses-free 3-D.

The drawback at this point is that most of that saved power goes to carrying out the complex computations needed to keep that shape-shifting barrier humming along. The next step for the researchers is to refine and simplify the math to reduce the amount of intensive computing involved.