Having a computer for a brain has its perks, but it has its drawbacks as well. Language is a tough... 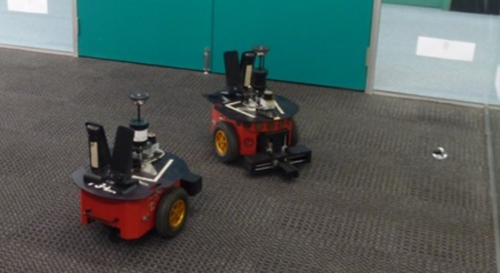 Having a computer for a brain has its perks, but it has its drawbacks as well. Language is a tough concept for robots, as words can convey the abstract as well as the concrete and robots have trouble knowing the difference (and grasping the abstract). That makes human-machine interaction less than intuitive for humans and confusing to ‘bots. But Australian researchers are hoping to change that by teaching robots to communicate verbally in a language of their own creation, the same way humans did.

Developed at the University of Queensland and the Queensland University of Technology, these “Lingodroids” are small, wheeled mobile robots that use cameras and laser range finders to navigate an environment. But they also carry microphones and speakers so they can speak to and hear each other. Using their “voices” and “ears,” the two Lingodroids play a series of games that require the robots to navigate spatially by creating a shared language between them.

It works something like this. The robots roam their environment, and if one finds itself in an unfamiliar place, it will make up a word to describe it from randomly generated syllables. It communicates that word to other robots it meets there, establishing the name of the locale within the community. From this, a spatial and verbal framework is established to name places on the map.

The robots will also play other games with each other. One will say the name of a place and each will race to the place it associates with that particular made up word. Robots can also ask one another about where they just came from, and which directions it is from where they currently are. Over time, the robots have developed a pretty solid, mutually agreed-upon understanding of what’s what inside their shared environment. In other words, they’ve invented a language through which they can talk about their surroundings.

It’s not as nuanced as learning Cantonese, but the researchers hope to teach the Lingodroids to communicate with each other about more elaborate ideas and concepts. The larger aim is to devise a better means for robots to speak verbally with each other–and eventually with human beings.