Both NASA and the ESA can see the decommissioning of their current spacecrafts on the horizon, but a new collaboration... 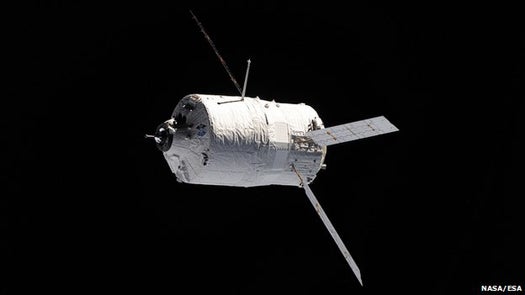 Both NASA and the ESA can see the decommissioning of their current spacecrafts on the horizon, but a new collaboration between the two could see a jointly designed U.S.-European spacecraft akin to the current ESA Automated Transfer Vehicle (ATV) later this decade.

The ATV is Europe’s largest spacecraft–an unmanned, robotic freighter than transports more than eight tons of supplies to the International Space Station at a time. It docks with the ISS automatically and can serve as a crew vessel while attached to the orbiting station, though it is not designed for manned space travel.

But only three more ATV missions are scheduled/funded by the ESA beyond the one that is at the ISS now, and officials there–who, it should be noted, are facing the same kind of fiscal tightening as NASA–feel that the technology tested and expertise gained from the current ATV initiative should be built upon. As such, they’ve reached out to NASA concerning a possible joint venture in spacecraft design.

It’s really not clear what kind of spacecraft that would be or what its mission profile would look like. ESA officials are not yet saying if it would be a manned vehicle or not, or what it might bring to the table. But both the ESA and NASA have some complimentary technologies and interests to offer one another.

For instance, the U.S. has built its space legacy upon manned missions, whereas the ESA’s space endeavors have been largely robotic. Both are interested in the possibilities beyond Earth orbit, including the idea of using the ISS as a jump-off point for longer missions to the moon and eventually Mars. And both–though neither is likely to admit it–are likely having hushed conversations about China’s space ambitions, which threaten to eclipse those of NASA and the ESA in the next decade.

For now, we can only speculate as to what this new spacecraft might look like and do should it become a reality. ESA Director General Jean-Jacques Dordian told BBC that he wants to have a proposal hammered out by October.