The Square Kilometer Array needs to borrow your hard drive 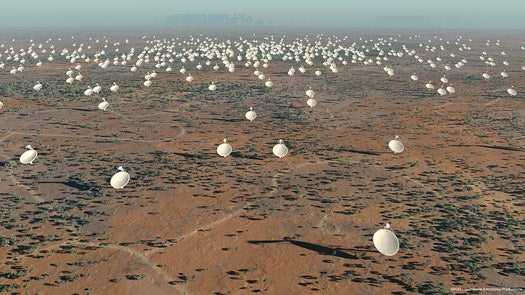 Australia wants to host the world’s biggest and most sensitive radio telescope, and as part of its bid to land the $2.1 billion Square Kilometer Array (SKA) the joint Aussie-New Zealand effort is going go launch a massive cloud computing initiative in September to prove it can handle the data flow. The initiative could quickly turn into one of the largest scientific cloud computing networks in the world, tapping the computing power and storage offered up by desktop computers worldwide.

The Square Kilometer Array, as the name suggests, is going to be huge; 3,000 radio dishes will be spread as far as 2,000 miles in every direction from a central core, offering a full 1,000,000 square meters (that’s one square kilometer) of collection surface. Such a sensitive instrument will probe the very beginnings of the universe, help test general relativity, and map the cosmos in unprecedented detail.

It will also produce reams upon reams of data, so much that it’s estimated that the SKA could need data links with a capacity greater than that of the current Internet– the whole Internet. Australia is already sinking $80 million into the Pawsey Center in Western Australia, a supercomputing hub that will be petaflop-capable and the third fastest supercomputer in the world when it comes online in 2013 (based on today’s rankings).

But even that might not be enough. By 2020, when the SKA is only partially complete, it will already be churning out such massive amounts of data that two Oxford researchers have been looking into cloud computing alternatives to help manage the mess. Housing the data with something like Amazon’s cloud storage service would be expensive, but distribute that data across the many desktops and mainframes at universities and institutes across the globe, and things start to click.

Researchers at the Aussie-based SKA project don’t aim to stop there. They see individuals that are not affiliated with the SKA or any of its affiliate research institutions also opening up their desktops to the array’s application. And of course, there’s a quid pro quo here: give up some computing power, get some data. The initiative could offer free access to astronomers–professional and amateur alike–in exchange for some processing power.

It seems a good deal all around if it eventually happens (South Africa is also vying for the SKA, and a decision won’t be made regarding its final location until next year). For SKA, it saves the trouble of constantly adding computing capacity (and cooling that capacity via a huge energy bill). This way, that computing (and the energy suck, and the heat) is distributed between hard drives that are already running anyhow. But it would also engage the public and the global academic community, offering everyone access to one of the world’s biggest and baddest science instruments.